FOX Squeaks By CBS For #1 On Wednesday In The US. ITV With Football Tops In The UK. Seven Again #1 In Australia on Wednesday.

Posted on March 6, 2014 by overtheshouldermlb

Wednesday, 03.05.14
FOX was tops in the U.S. on Wednesday with two hours of their big show, ‘American Idol’ as it pulled in 10.051 million viewers and a 7.0 rating and an 11 share in the households. As has been reported numerous times, it is not what it was in the past as it is down 18% from the 8.5/13 on this comparable date a year ago. But it has not failed in terms of ‘The X Factor’ collapse. One of the highlights on this edition of the long running show is the judging. Collectively they are popular and Harry Connick Jr is the decided realist as he has continually provided contestants why their performances are not up to par while Jennifer Lopez is ‘Miss Popular Pop Artist’ and provides the motherly touch. Keith Urban gives an everyman approach and often conflicts with Harry’s opinion. As an example, last night Harry believed a number of the talent were singing ‘sharp’ and he pointed it out as non-acceptable at this point in the competition. Keith objected and declared that singing ‘sharp’ depended upon the artist as to whether it was bad or good. Singing ‘sharp’ is off-key. How can that be a good thing? Very interesting views by the different judges.

CBS came in second but had the top show on television on Wednesday. At 8P, the veteran and original reality show, ‘Survivor’ drove in 9.62 million viewers and rose to a 6.1/10, which was a 7% increase from its season-opener last week. At 9P, the #1 program of the evening in the U.S. on Wednesday, ‘Criminal Minds’ pulled in 11.37 million viewers and a . At 10P, the reliable ‘CSI’ was dominant with 9.19 million viewers and a 6.1/10. It is amazing how these older shows perform for The Tiffany Network against all the new and older programming.

NBC at 8P had ‘Revolution’ leading off the evening with 4.77 million viewers and a 2.5/6. It led into the 9P, ‘Law & Order: SVU’ which drew 6.03 million viewers and a 4.3/7, a big jump for the Peacock Network. But at 10P, ‘Chicago PD’ had a brilliant episode once again teetering the audience on whether the head of the investigative unit is dirty or not. The police drama set in the Windy City drew 6.07 million viewers, tops for 30 Rock on Thursday and a 3.9/7.

A&E was the top cable network on Wednesday and the #5 network overall led by ‘Duck Dynasty’ which drew 6.100 million viewers at 10P which was the #2 program at that time period in prime time, second only to ‘CSI’.

On this date in 1981, the legendary newsman, Walter Cronkite, the ‘Most Trusted Person In America’ appeared on his last episode of ‘CBS Evening News with Walter Cronkite’. He had been on the job 19 years. To watch the final two minutes of this historic telecast, go to: http://www.youtube.com/watch?v=t6v7Fx3igg4

Daniel Sturridge scored on header as England was victorious over Denmark. Telecast on ITV, it was the UK’s #1 program on Wednesday.

Seven’s ‘My Kitchen Rules’ had its first sudden death cook-off on Wednesday. Married couple Deb and Rick from South Australia were eliminated from the show, after losing to the young newlyweds Uel and Shannelle. 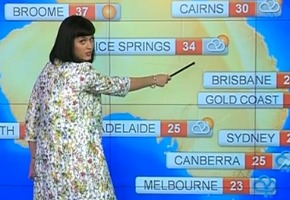 Katy Perry pops up as the weather girl on Seven.

On a weather note, Singer Katy Perry turned impromptu weather presenter on Sunrise this morning, during an appearance on the Seven breakfast show. But she had a spot of bother locating, and pronouncing, some of the cities. Canberra became ‘Coonaberra’ and Hobart was ‘Hogwarts.’ It was all in spirited fun for the Prism singer. “If you don’t understand all of this, I’m sure you have an app on your phone,” she suggested. Perry clearly loves the show given she performed on it only last year. Seven even tracked her arrival to the studios with a chopper. Whilst she didn’t perform this time around, she happily met giddy fans outside the Martin Place studio.