Posted on July 29, 2020 by overtheshouldermlb 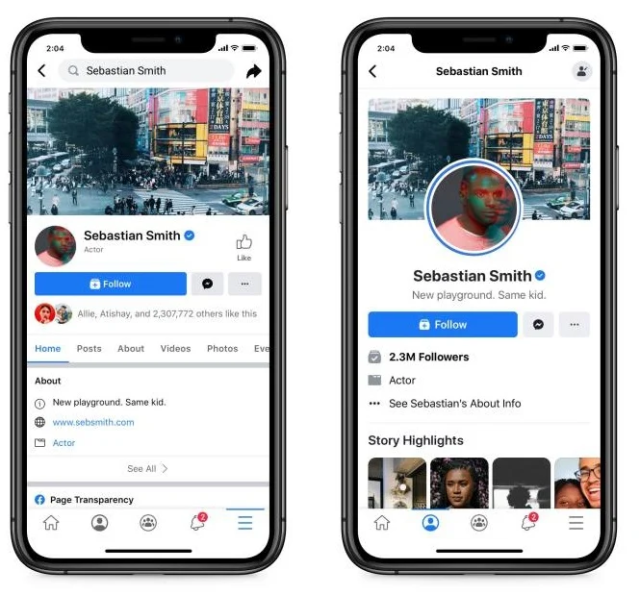 Facebook is testing a new Page format in its app which is designed to put more emphasis on the essential Page details – and which also, interestingly, removes the option to Like a Page, with the focus instead shifted to ‘Following’.
The example below shows the current format (left) and the new format side-by-side. As you can see, the new layout includes a larger, central profile image, a short statement beneath the name, and larger text for the key details.
But the biggest change is the removal of the Like button. As you can see, the main CTA button on the new Page is a prominent, blue ‘Follow’ prompt, while the total Like count is also not displayed. Instead, a total ‘followers’ figure is shown.
That actually makes a lot of sense. While people who Like a Facebook Page also automatically become followers of the same, many subsequently opt to stop following at some stage.
So while your Like count might be 1,000, at least some of those people won’t be seeing your updates. But your followers will. People who’ve expressly chosen to follow a Page will (in most cases) see all of that Page’s updates, and in this respect, the follower count is far more valuable than the Like figure.
That doesn’t mean that Likes serve no purpose, Facebook still uses Likes as a proxy for a Page’s popularity and relevance, which would have some impact on reach within its algorithm.
But then again, given the fact that it’s now testing the removal of Page Likes as an option, it probably isn’t weighting them very heavily.
So really, Followers is a much more relevant indicator, any way you look at it.

The new Page layout also includes some admin and system changes that will make Pages easier to manage.
For one, Facebook is looking to make it easier to switch between your personal and business Pages, so you can comment and interact from each with a few taps.
Facebook’s also looking to make it easier to assign and manage admin access permissions based on specific Page elements.
These changes are relatively minor, but helpful either way, while the removal of Likes has more broader reaching implications and considerations, which could eventually change the general Facebook management process.
The new format is currently being tested with a small group of public figures, but Facebook is broadening the test over time to more Pages. If/when it becomes available to you, you’ll be notified in the app. #TheMoreWeKnow #cnasophis💡