Fireworks Bring NBC Fourth Of July Victory In The U.S. ITV #1 In The UK With World Cup. Seven Tops In Australia.

Posted on July 5, 2014 by overtheshouldermlb

The Peacock Network presented the Macy’s Fourth of July Fireworks Spectacular all night long. And the nation embraced the presentation brought to them by the largest department store chain in America. From 8-10P, the original airing drew 5.34 million viewer, topping out at 930P with 7.74 million viewers and winning each half hour of prime time. At 10P, a rerun of the highlights brought in 4.355, again the top program in its time slot but it did not win the 10P half hour as CBS’ ‘Blue Bloods’ topped that half hour. 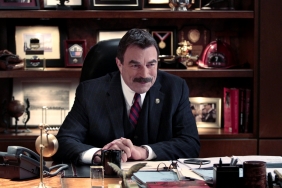 The Tiffany Network responded with the old reliables, reruns of its regular season leading schedule beginning at 8P with ‘Undercover Boss’ which brought in 2.25 million viewers. At 8P, a rerun of one of the better episodes of ‘Hawaii Five-0’ brought in 2.81 million viewers as a grifter is caught between murder and marriage. Will redemption be in her future? Must See TV ON DEMAND episode is for your viewing. At 10P, a rerun of the usual leader on Fridays, ‘Blue Bloods’ which brought in 4.36 million viewers and brings Frank face-to-face with reality of his troops while Danny is assigned as the subject for a Hollywood star. Terrific episode.

The Animal Network of Broadcast had an all rerun evening as at 8P a rerun of ‘MasterChef’ which drew 1.325 million viewers. At 8P, a rerun of one of the best episodes of ’24: Live Another Day’ drew 844,000 viewers. 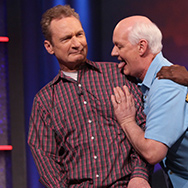 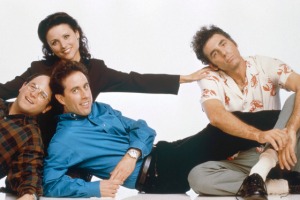 On this date in 1989, the pilot episode of ‘Seinfeld’ aired on NBC. To see the first dialog, go to: https://www.youtube.com/watch?v=aDiM-3ot9Q0 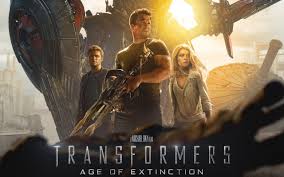 Who Is Regularly Going Online While Watching Television? 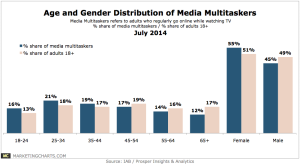 Some 43% of US adults regularly go online while watching TV, and these “media multitaskers” tend to be young and female, per the report. African-Americans also over-index in this behavior; they comprise 22% of media multitaskers, versus 18% of the adult survey sample.

Upscale marketers shouldn’t ignore Baby Boomers, the massive segment of the population that is “even more valuable and affluent” than those coveted Millennials, argues the Shullman Research Center in a new report [download page] detailing the wealth and financial outlook of Baby Boomers. Compared to their share of the adult population, Baby Boomers command an above-average share of total net worth and total income dollars. What’s more, “Upscale” Baby Boomers are looking to spend on luxury products.

“Upscale” Baby Boomers refers to those who either have a personal net worth of at least $1 million or who live in a household with income of at least $250,000. Upscale Baby Boomers number about 9 million, or roughly 12% of all Baby Boomers adults (about 75 million). These Upscale Boomers by themselves control almost one-quarter (23%) of total estimated net worth, more than the entire Millennials market (21%). In fact, Baby Boomers overall control 39% share of total discretionary spending in the US, compared to 21% share for Millennials, according to a MarketingCharts Debrief, “Advertising to Baby Boomers; The Why and How”. (For a gateway into the study, go to: http://bit.ly/TRW6KG). It details the categories that Baby Boomers allocate most of their discretionary spending to, while going into more detail about this generation’s receptiveness to advertising and the channels that are most likely to influence their purchases. 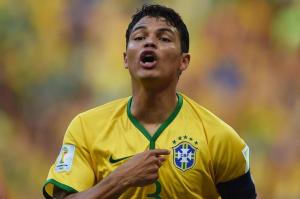 ITV and the ‘2014 World Cup’ match between Brazil and Columbia were #1 in the UK on Friday.

ITV has the ‘2014 World Cup’ football with Brazil and Columbia and it was the highest rated primetime program on Friday, with an average audience of 7.48 million (37.1%) tuning in as Neymar, the tournament’s poster boy, fractured a vertebra in his back during Brazil’s 2-1 quarterfinal victory over Colombia on Friday. The audience peaked at 9.52 million viewers during the last 15 minutes of the game.

BBC Two presented ‘Gardener’s World’ which had an audience of 1.46 million viewers (6.7%), the highest rated on the evening for Two. ‘Today at Wimbledon’ brought in a disappointing 1.19 million viewers (6.1%, with highlights of Novak Djokovic and Roger Federer’s semi-final victories. The two will play each other in the men’s singles final on Sunday (July 7).

Seven was #1 in Australia on Friday but ABC1’s ‘Old School’ was the top drama.