NBC Wins A Close One On Monday In The U.S. ITV Is #1 In The U.K. Nine Wins For The Second Straight Night In Australia.

Posted on April 1, 2014 by overtheshouldermlb

This is how ‘I Met Your Mother’ as the story of the umbrella was the center post of a rare love story.

Monday, 03.31.14
On the last night in March, 2014, NBC had two powerful programs, as ‘The Voice’ may be slipping a bit. Already announced yesterday that Pharrell Williams will replace longtime judge, Cee Lo Green on season seven next year, the episode drew 12.08 million viewers and a 7.6/11, to finish #3 for the first time in recent memory. At 10P, without competition from an original episode of ‘Castle’, ‘The Blacklist’ drew 11.39 million viewers and a 7.2/12 as it weaved the path to eventual confrontation between the heroine and her husband. Without question, this is a Must See TV ON DEMAND episode. But the duo on Monday at 30 Rock topped the charts.

ABC has two extremely strong programs on Monday during this time of the year and it usually leads to victory as the Alphabet Network shows its muscle and battles NBC for the top spot on the first work day of the week. But, this week it fell just short. At 8P, the leading dance show on television, ‘Dancing With the Stars’ powered to the top spot again by drawing 13.69 million viewers and a 9.6 rating and a 15 share of the available audience in households. The night would have been bigger except ABC decided to throw a rerun of ‘Castle’ against the competition and drew 7.41 million viewers and a 4.9/8, which still crushed CBS’ late prime time entry.

On CBS, the evening began with the finale of the nine year run of ‘How I Met Your Mother’. It was one of the most interesting closings of a show in the history of television. Yes. We finally found out how he met his children’s mother, in a wonderful, warm and most satisfying storyline, crafted perfectly to a most satisfactory ending. The blue french horn in his left hand and the knowing smile from both brought to conclusion one of the longest running comedies on CBS’ long history of great comedies. At 8-9P, it drew 12.94 million viewers and an 8.6/13, 43% above last week’s performance. ‘How I Met Your Mother’ dominated the New York ratings race in Monday’s opening hour, with a 6.9 rating/20 share in adults 18-49 topping the combined ABC-NBC-Fox-CW ratings. This season, the program ranked #3 in comedies on all of television, just behind ‘The Big Bang Theory’ and ‘Modern Family’. Even if you never watched this program before, It is a Must See TV ON DEMAND episode. At 9P, the new comedy intended to replace ‘HIMYM’, ‘Friends With Better Lives’ has a long way to go. It drew 7.99 million viewers in its premiere and a 5.1/8, well below expectations. At 930P, ‘Mom’ continued the slide downward with only 7.24 million viewers and a 4.8/7. Then at 10P, the totally inconsistent finale of ‘Intelligence’ presented an episode which should have been one of its first instead of the last as it drew only 5.55 million viewers and a hugely disappointing 3.9/6. If there is one thing to learn about this night, The Tiffany Network has a lot of work ahead of them to fix their Monday evening. It would not hurt anyone’s feelings if the entire schedule was wiped out and new content brought in to replace all.

FOX at 8P had ‘Bones’ which was up against a rock and a hard place as it was able to draw 5.63 million viewers and a 3.8/6. Luckily, DVR’s will pull up this number in the LIVE+7 final results. At 9P, ‘The Following’ would be a different story. It could only draw 4.23 million viewers and a 3.3/5. It finished #10 out of only 12 shows in prime time on broadcast television on Monday. For the Animal Network of Broadcast, this show is a disaster. It might be best to run it on Friday’s to bury it from the rest of humanity until the contract runs out on the guy who is only 3 degrees from everyone on the planet.

At 1135P, NBC’s ‘The Tonight Show with Jimmy Fallon’ was #1 again, as it has been for every single night that Fallon has taken over the legendary late night talk show with a 3.1/9. ABC’s ‘Jimmy Kimmel Live’ drew a 2.1/5. CBS’ ‘David Letterman’ drew a disappointing 1.9/5, down 27% from last year, with guest star, Cobie Smulders of ‘How I Met Your Mother. At 1235A, NBC’s ‘Late Nite with Seth Meyers’ drew 1.5/5 while ABC’s ‘Nightline’ drew 1.3/4 and CBS’ ‘Craig Ferguson’ with guest Drew Carey, drew 1.0/4. That was too bad as Carey was on top of his game and for the suits at Black Rock, they might rethink their late night intentions in the future. Carey was so comfortable it seems it is his venue, not Ferguson’s. And his discussion with guest, Carl Reiner, was Must See TV ON DEMAND stuff. Reiner’s recollection of the ‘2000 Year Old Man’ with Mel Brooks was a history lesson that Carey so respectfully passed along to viewers. This was the program to see in late night last night. He would be a perfect match for Jon Stewart sometime in the near future. At 135A, NBC’s ‘Carson Daly’ drew a strong 0.9/4.

The Vagabonds were featured on ‘Happy Pappy.

On this date in 1949, a little remembered but historically very important series ‘Happy Pappy’ premiered. It was the first all-black-cast variety show. It premiered on WENR-TV in Chicago. It was a Jazz oriented show featuring the Four Vagabonds and the Modern Modes. Ray Grant was the master of ceremonies.

Greg Kinnear has never been better. ‘Rake’ has been banished to Saturday.

It was a fait a accompli. It was FOX being brave at first and then cowering like a duck undercover as the wave of hunters search out the river edges for their quarry. ‘Rake’ has been quietly pushed to Saturdays for the final two episodes in the inventive series to complete its contractual obligations and banish it into the oblivion as it will now be up against the ‘Final Four’ on TBS. The first-year Greg Kinnear series, which opened in late January on Thursdays behind ‘American Idol’ was shifted to Friday in March due to low ratings. Now, instead of airing its final two episodes on Fridays, the show is getting a two-hour sendoff this Saturday. Last week, ‘Rake’ managed a mere 0.4 rating/1 share in adults 18-49 and 1.9 million viewers overall opposite Sweet Sixteen match ups in college basketball’s biggest tournament, on CBS. So to the not so good gambler lawyer whose brilliant mind doesn’t really mesh with society in today’s Los Angeles, over in Hollywood, the suits at FOX are saying brilliant writing and great acting are not part of what the Animal Network of Broadcast is all about. Bring on the nightmares in the kitchen and the three degrees of whatever Kevin Bacon is appearing on.

International Court of Justice orders Japan to halt whale hunt in Antarctic. Most of the whale meat from Japanese hunts ends up being sold. This was the main issue in ‘Whale Wars’ on the Animal Planet.

For years, Animal Planet has brought us ‘Whale Wars’. Finally, the world is not only seeing what is being done, it is acting on what is being done. International Court of Justice orders Japan to halt whale hunt in Antarctic. Most of the whale meat from Japanese hunts ends up being sold. More » http://hsalinks.com/1huhYE8

According to Laurie Sullivan, writing in Media Post (03.31.14), U.S. advertisers spent 8% more on search campaigns in Q1 2014 compared with the prior year. Clicks on search ads rose 5%, and click-through rates increased 23%, but impressions fell 15% in the quarter compared with the previous year, per IgnitionOne’s Q1 2014 digital marketing report.

IgnitionOne analyzes about $1.5 billion in online advertising investments to determine quarterly numbers. The Q1 2014 digital marketing report focuses on the growth of search advertising on mobile devices, other paid-search trends and programmatic display advertising. Marketers in the U.S. also spent 79% more on tablet campaigns, while the amount spent on smartphones rose 107%.

Impressions on tablets rose 25%, while clicks rose 39% and CTR, 11%. Smartphone impressions rose 131%; clicks, 217%; and CTR, 37%. The cost per click fell 35%, which IgnitionOne attributes to marketers becoming more sophisticated with bidding and efficient with traffic patterns on the devices.

Welcome to new viewers on every inhabitable continent in the world, including the U.S., Canada, Mexico, the UK, Ireland, France, Belgium, the Netherlands, Norway, Sweden, Germany, Switzerland, Spain, Italy, Israel, India, The Republic of Korea, Australia, Kenya and Paraguay.

ITV at 8P presented ‘I Never Knew That About Britain’ and drew 2.89 million viewers and a 12.5% share of the available audience. But it was at 9P, that Reece Shearsmith’s drama, ‘The Widower’ topped the night outside of soaps with 5.50 million viewers (22.7%) for its finale. 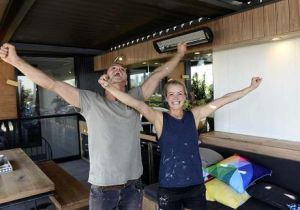 ABC1 (13.1% share of the audience) had the 10th ranked program on the evening as ‘ABC News’ finished as the only Top Ten program to draw less than 1 million viewers, as it pulled in 931,000.

For the record, on Monday evening Ten finished as the third highest ranked network in the nation with 13.3% share of the available audience watching its programming.

The Top program is ‘My Kitchen Rules’. The Top drama is ‘Doc Martin’. The Top sporting event was ‘The Australian Gran Prix’. The Top newscast was ‘Seven News Sunday’.