CBS Dominates on Sunday In The U.S. BBC One Tops In The U.K. Nine Wins In Australia.

Posted on March 31, 2014 by overtheshouldermlb 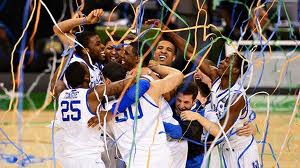 CBS was #1 on Sunday as it dominated broadcast.

Sunday, 03.30.14 (Posted on Monday, 03.31.14
CBS began the evening at 7P with the end of the Kentucky victory over Michigan to earn the final spot in the Final Four of the NCAA Basketball tournament with 16.44 million viewers and a 12.6 rating and an amazing 23% share of the available audience. After the game, with a strong ’60 Minutes’ which had three great stories; the first about how Wall Street is fixed by stating, “This form of front-running is legal. It’s legalized front running. It’s crazy that it’s legal for some people to get advance news on prices and what investors are doing.”; the second about the founder of Tesla and how in 2008 he was flat broke and then Christmas came; and the third about a great blind Jazz musician from Jacksonville, FL, as told to us by Wynton Marsalis, drew 13.25 million viewers and a 10.9/19. Of historic note, it was 20 years earlier that Ed Bradley on this very program brought all of us the story of another young Jazz protegé, Wynton Marsalis. At 8P, ‘The Amazing Race’ ran a difficult race for many while getting rid of nobody and drew 9.82 million viewers and a 7.0/11. At 9P, ‘The Good Wife’ had its first episode without Will and it was fascinating seeing how each of the participants handled the situation…or didn’t handle it. It was Must See TV ON DEMAND episode. It drew 10.39 million viewers and a 8.1/12, one-off the highest of the season. Then came a terrific ‘The Mentalist’ episode at 10P with Jane once again devising a Master Plan at capturing the crooks and murderer. It was classic ‘Mentalist’ as it drew 9.54 million viewers and a 6.2 rating and an 11 share for the Tiffany Network.

Academy Award Winner for Best Documentary. ‘Down and Out In America’

On this day in 1987, HBO (Home Box Office) earned its first Oscar for ‘Down and Out in America’. Poverty, foreclosure, homelessness, circa 1986, it was directed by Lee Grant, an Emmy & Academy Award Winning actress. She won the 1986 Academy Award for Documentary Film. For a look at this exception work, go to: https://www.youtube.com/watch?v=7dMKZjCmIWc

The Man With The Arby Hat…Pharrell Williams will join NBC’s ‘The Voice’ next season replacing Cee Lo Green.

Digital/Mobile
‘The Walking Dead’ finale was also a trending topic of discussion on Facebook and over a 12-hour period, from 3P – 3A, 3.1 million people had 5.8 million interactions surrounding ‘The Walking Dead’.

Nine came through with victory on Sunday in Australia as ‘The Block’ finished as the #1 program on the evening. Nine finished with a powerful 36.2% share of the available audience to Seven’s 33.0% share. Ten finished with 12.0% share and ABC1 had 11.2%.