Posted on January 16, 2014 by overtheshouldermlb 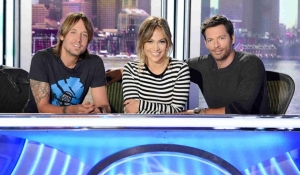 Don’t look the other way. With a new judge, the multiple EMMY and Grammy Award winner Harry Connick Jr., the popular Jennifer Lopes back for a second turn and multiple Grammy and CMA Award winner Keith Urban back for another year, the jazz, pop and country formats are covered as ‘American Idol’ came back with a bang and topped the evening on FOX with 15.19 million viewers and a 9.4 ratings and a 15 share of audience. It reached its peak at 9P with 15.34 million. For FOX that’s big. For FOX that is also down about 20% from the pervious ‘American Idol’ opening. But before everyone gets on the bandwagon of suggesting that the show is getting old (The median age of the show’s viewers has steadily increased to more than 51 years in its 12th season, according to Nielsen, up from 31.9 years in its first season back in 2002.) and that the sky is falling, this year’s edition shows signs of getting back to basics. And it appears to be a good thing. There was an instant camaraderie on set and it transferred into an enjoyable two hours. This show is worth looking at this season with none of the hateful baggage of the past. Plus, there are a lot of superb new people with a lot of talent yet to be discovered. Who will ever forget James Earl mummering (‘sometimes I just do dat’) or Katelyn Jackson, a teen who penned ‘Another Angel’ after her grandfather suffered a heart attack as she performed onstage. From Boston to Austin, it was moments like these that makes ‘Idol’ so compelling. Congrats to FOX for remaking an old show and bringing joy back into the equation. If you missed it, get on demand now.

On additional thought on ‘American Idol’. Coca Cola had some of the best integrated commercials in the history of television on the show. Their music oriented spots fit perfectly into the structure of the show and drove their product, front and center, during the course of the evening. If they follow through with this theme via digital and mobile, it will be truly fully integrated marketing. Things really do go better when they are integrated.

NBC was a mystery. At 8P, ‘Revolution’ just didn’t hold up to the competition and could only muster 4.78 million viewers and a 3.2/5. At 9P, the true and trusted ‘Law & Order:SVU’ saw one of the old cast members leave in an emotional episode and drew 5.44 million viewers and a 4.3/7. But it was at 10P that NBC continued to stun audiences. ‘Chicago PD’ is absolutely superb and it is a great addition to The Peacock Network. Wednesday’s episode was thrilling, exciting and suspenseful. It was emotionally raw. Yet it only drew 5.5 million viewers and a 3.8/6, tops for the network on Wednesday. Most important, it held its lead in. But it deserves better. Yes…it is brutal at times. Yes…it is edgy. But it is absolutely riveting. This deserves to be put on your on demand list now.

On cable, ‘Duck Dynasty’ drew 8.516 million viewers as it premiered its new season on A&E at 10P, good for #2 in all of television in that time period. For the evening, A&E finished for 4.858 million viewers in prime time.

MEDIA NOTE: Telemundo Media’s “La Impostora,” reached a cumulative audience of 2,386,000 total viewers and 1,168,000 adults 18-49 on premiere night earlier this week, according to Nielsen. Starring Lisette Morelos and for the first time together, mother and son, Christian Bach and Sebastian Zurita, the original production taped in Mexico averaged 1,608,000 total viewers and 753,000 adults 18-49, becoming Telemundo’s best 8P novela premiere among total viewers in nearly eight years. Locally, the new novela ranked #1 in Miami with adults 18-49, regardless of language and ranked #1 in New York, among Spanish-language networks.

Great Britain Bake Off Sport Relief Topped All In The UK on Wednesday.

And for those who were wondering, after a six-year absence, ‘The Kumars’ returned with a disappointing 370,000 (1.7%) on Sky1, a shadow of its former run on BBC One. Bye Bye Kumars.

As you can see, no matter where you watched television on Monday, people were …