Posted on June 2, 2016 by overtheshouldermlb

‘It’s All About Screens.’ This is the Daily Diary of Screens. Thursday, June 2, 2016.
NBC finished #1 broadcast network as ‘American Ninja Warrior‘ was the top program.
In the UK, BBC Two finished #1 as ‘Springwatch‘ was the top program
‘Nine‘ finished #1 in Australia as ‘Seven News‘ was #1 newscast and ‘State Of Origin NSW v QLD‘ was the top non-newscast program.
‘X-Men: Apocalypse‘ #1 at the U.S. box office weekend 27-29 May 2016.
‘X-Men:Apocalypse‘ #1 at the International box office weekend 27-29 May 2016.
Sales of movie theater ads jumped 13.4% in 2015 as it reached $716 million in advertising sales. There are 3.734 Billion Unique Mobile 68% Social Ad Clicks Are Now Mobile. Users as of this quarter, account for a 51% worldwide penetration. Direct uploads of user videos to Facebook now exceed YouTube. Facebook has 1.59 billion monthly users. Instagram has 77.6 million users. 88% of Twitter users are on mobile. An average of 500 million tweets are sent every day. The Google+1 button is hit 5 billion times per day. 80% of Internet users on Pinterest are female. Pinterest has 54.6 million users. LinkedIn has 347 million registered members. Weibo has 100 million daily users. 600 million users on Whatsapp. Facebook has 1.55 billion monthly active users. 60 billion messages are sent via Facebook Messenger and WhatsApp every day. Netflix now has 75 million streaming subscribers. Cliptomize continues to grow as it has 76,501 users and 109,743 clipbooks with 540,939 visitors with over 2.771 million page views. 5 minutes 58 seconds average time spent on spent on site since the beginning. 6 minutes 09 seconds average time spent on site in May. There were 63,405 visitors in May, 54.2% of which returned. THURSDAY AUSTRALIAN OVERNIGHT TV RATINGS (*SEE BELOW) 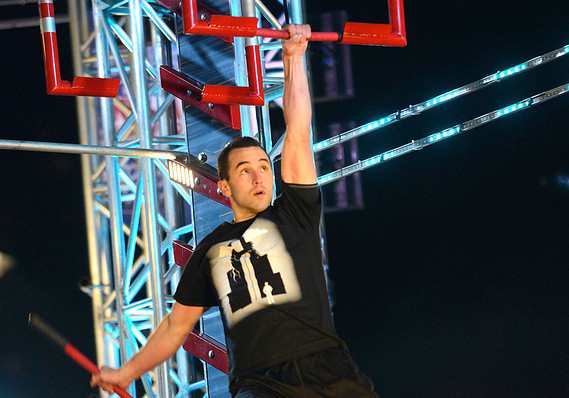 NBC #1 Wednesday as ‘American Ninja Warrior’ was the top program.

On this date in 1953, BBC-TV aired the Coronation of Queen Elizabeth II in Westminster Abbey.

Daniel Craig To Star In His First U.S. TV Series

Daniel Craig, ‘James Bond’, will be the star of his first television series on Showtime in the limited series ‘Purity’, based on the best selling book by Jonathan Franzen. The deal was announced by Variety 060116.

From Location To Listening Habits…A Media Divide Exists According To Age
When it comes to life choices, nearly every generation has drawn at least a little ire from their longer-lived predecessors—be it their style of clothing, political views or taste in media. From music to movies, younger, often early adopters, have a penchant for blazing their own, new paths.

According to Nielsen’s Generational Snapshot study, which looked at media usage and device penetration of Millennials (18-34), Generation X (35-49) and Baby Boomers (50-67), distinct differences—as well as a few notable similarities—exist when it comes to connecting with content.

Location, Location, Location
Just where these different generations predominantly live can help provide a line of sight to content creators and marketers alike—perhaps even acting as a barometer for a future populace.

In certain Designated Market Areas (DMAs), such as Pittsburgh (PIT), Detroit (DET) and St. Louis (STL), Baby Boomers—who can spend over 184 hours per month watching Live or time-shifted television—make up more than one-quarter of the population in their respective regions. It’s no surprise then, that, according to Nielsen’s most recent Local Watch Report, these DMAs are three of highest in terms of daily traditional and/or timeshifted television use at an average of over five hours per day!

Mulling Their Options
While time spent on traditional television has decreased across most generations over the past several years, device fragmentation has led to more content options, and consumers are taking full advantage of them—regardless of age. For example, tablet penetration among all generations analyzed has increased 9% from 2014 to 2015. At 70%, Generation X leads the way in terms of national tablet penetration.

Multimedia devices (such as Roku, Apple TV and Google Chromecast) have also made their mark on a wide swath of consumers. These relatively inexpensive options extend viewing choices, and consumers continue to spend time with them. In fact, according to the study, monthly time spent using multimedia devices has increased across all of the generations. What’s more, while Millennials spend the most time on these devices, Baby Boomers show an increase year over year in time spent on multimedia devices by two hours and 56 minutes in fourth-quarter 2015.

The Ears Actually Have It
Perhaps no other form of entertainment is as different, and in many cases as polarizing, throughout the generations as music. From big band to rock and roll to hip-hop to electronic, music preference is often generational. The study looked at the music formats and found that both Millennial and Generation X listeners prefer to tune into the modern classics of Pop Contemporary Hits, with weekly total audiences of 27.5 million and 19.3 million listeners, respectively. And regardless of the disparity with regard to the weekly cume numbers, both of these groups spend more than three hours 15 minutes tuning in to this format. 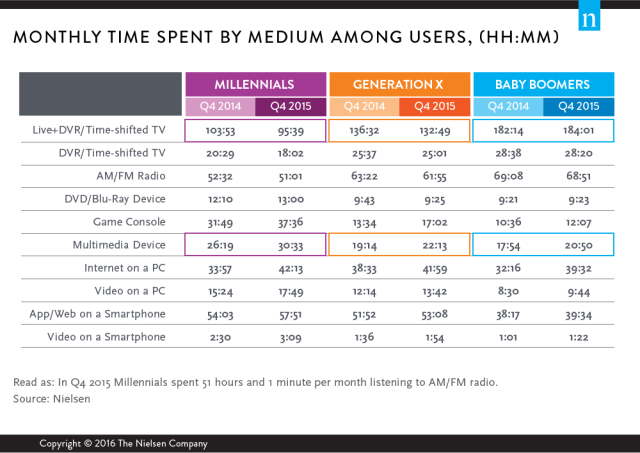 Baby Boomers, on the other hand, prefer the Adult Contemporary/Soft Adult Contemporary genre, spending more than four hours weekly listening to the smooth sounds. That group is also more disposed to listen to the News/Talk format, with about 15.7 million listeners tuning in for an average of six hours 45 minutes weekly. This compares to three hours 45 minutes for Millennials and five hours for Gen X.

In a world of seemingly endless content choices and a viewer that perpetually takes advantage of these options, knowing both adoption and use among the different generations helps provide the industry with a look at where eyes—and ears—are and how old those consumers may be.

‘Get Outta My Life’

App User Retention Remains A Struggle in 2016
Mobile app use is highly concentrated, as recent data from comScore shows that mobile users spend the majority of their app time with their single favorite one. And while Nielsen data shows that time spent with smartphone apps is increasing, the number of apps that smartphone users typically access hasn’t really budged in the past few years. Now, Localytics provides some more context, detailing mobile app user retention rates in its latest annual study on this topic. The Localytics data shows that almost 1 in 4 users (23%) abandon an app after a single use. This figure remains squarely within the 20-25% range observed from 2012 onwards, suggesting that either apps are not doing enough to engage users, or that this is simply typical user behavior.

While app user loyalty hasn’t changed much in the past few years, the cost to acquire a loyal user has. As recently as 2014, the cost of acquiring a loyal iOS app user (one who opens an app three times or more) for brands who proactively market their apps hovered between around $1.50 and $2.25. Over the past year, that figure has not dropped below $2.50, and has spent most of the time above the $3 mark, even surpassing $4 on a few occasions. That data comes courtesy of Fiksu, which tracks the “Cost Per Loyal User Index” on a monthly basis.

As for iOS apps, user retention has slightly improved this year, per the Localytics report, which notes that 24% of users are abandoning an app after a single use, down from 26% last year. On the other end of the spectrum, this year 36% of users return to an app 11 or more times, up from 32% last year.

Indeed, in-app messages appear to have an outsized effect on abandonment and retention. The report notes that only 17% of users abandon an app after a single use when seeing an in-app message, compared to 26% of users who do so for apps that don’t utilize in-app messages.

About the Data: Localytics says it processes 120 billion data points monthly across more than 2.7 billion devices and 37,000 mobile and web apps. For this analysis, the firm measured the percentage of users who only used an app once as well as the users who returned multiple times. For the in-app messaging analysis, Localytics compared the percentage of users who did or did not return to apps who are using in-app messages compared to those who are not. The timeframe for the study was March 1st 2015 – April 30th 2016. 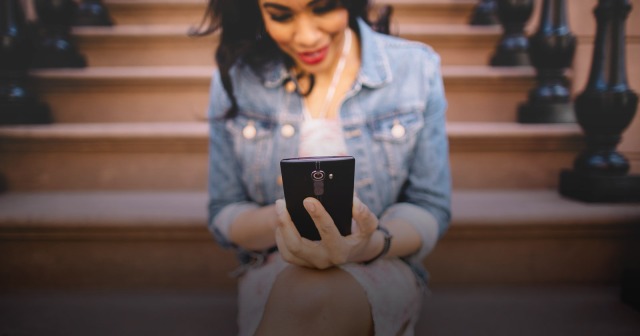