More Than One-Quarter of US Adults Go Online “Almost Constantly”

Posted on September 5, 2019 by overtheshouldermlb 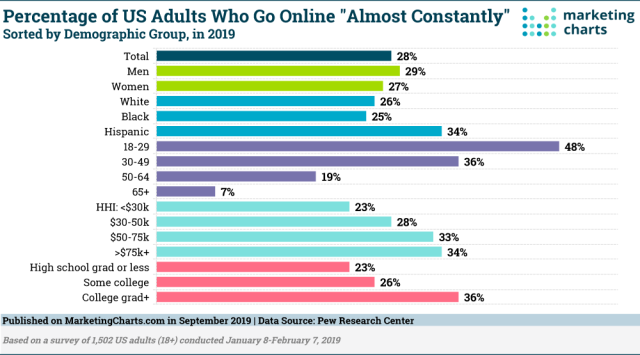 With an increasing number of devices such as smartphones, tablets and smart TVs that all allow individuals to access the internet, it’s no wonder that more adults are going online and with a greater frequency than ever before. Indeed, almost 3 in 10 (28%) US adults say they go online “almost constantly”, up a third from 21% in 2015, per survey data from the Pew Research Center.

Although there is a small percentage of US adults who never go online, Pew found that 81% of adults go online at least daily, with more than half of those (45%) saying they go online several times a day. For those adults who use mobile devices such as smartphones, a full 92% say they go online daily and about one-third (32%) say they are online almost constantly. Incidentally, Pew also found that a growing number of adults reporting that they primarily go online using their smartphone.

So, who are these adults who are nearly always online? Not too surprisingly, the youngest adults, those ages 18-29-years-old, are the most frequent users of the connected realm, with just about half (48%) saying they go online almost constantly. Conversely, few (7%) individuals ages 65 years and older say the same.

Another demographic almost always online is the Hispanic population. Indeed, the percentage of Hispanics who say they go online almost constantly (34%) is significantly higher than White (26%) or Black (25%) adults.

Also, while 93% of US college graduates go online at least daily, more than one-third (36%) say they go online almost constantly. By comparison, fewer than one-quarter (23%) of individuals with a high school diploma or less go online with the same frequency.

About the Data: Analysis for the report is based on telephone interviews conducted Jan. 8-Feb. 7, 2019, among a national sample of 1,502 adults, 18 years of age or older, living in all 50 U.S. states and the District of Columbia.