Posted on May 28, 2017 by overtheshouldermlb

‘Alien:Covenant‘ #1 at the International box office weekend 19-21 May 2017. Complete box office this weekend listed below.

This Weekend in 1942, ‘Yankee Doodle Dandy‘ was directed by Michael Curtiz and starring James Cagney, Joan Leslie, Walter Huston, and Richard Whorf, and features Irene Manning, George Tobias, Rosemary DeCamp, Jeanne Cagney, and Vera Lewis. According to box office records the film earned $11,800,000 at the box office. This made it the biggest box office success in the company’s history up to that time. It finished as the #2 movie of the year. The film won Academy Awards for Best Actor in a Leading Role (James Cagney), Best Music, Scoring of a Musical Picture and Best Sound, Recording (Nathan Levinson). It was nominated for Best Actor in a Supporting Role (Walter Huston), Best Director, Best Film Editing for George Amy, Best Picture and Best Writing, Original Story. In 1993, Yankee Doodle Dandy was selected for preservation in the United States National Film Registry by the Library of Congress as being “culturally, historically, or aesthetically significant”.

This weekend in 1942, ‘Tangerine‘ Jimmy Dorsey and His Orchestra with Bob Eberly and Helen O’Connell. The music was written by Victor Schertzinger, the lyrics by Johnny Mercer. The song was published in 1941 and soon became a jazz standard. The recording was released by Decca Records as catalog number 4123. The record first reached the Billboard charts on April 10, 1942, and lasted 15 weeks on the chart, including six weeks at #1. This marked the 4th week at #1 in 1942. The lyrics in this version differ slightly from those in the movie. On the record, Eberly sings “And I’ve seen toasts to Tangerine / Raised in every bar across the Argentine,” the lyric that became standard. In the movie at that point, the line is “And I’ve seen times when Tangerine / Had the bourgeoisie believing she were queen.”

Google is bringing location extensions, which trace the offline effect of digital ad exposures, to YouTube. Ads on the video platform will soon include address or map location data, hours, photos, call buttons and other tracking data. Store visits measurement will also be available soon for YouTube campaigns. Beyond store visits analytics, Google is expanding in-store sales measurement, which it has been testing since 2014. Facebook introduced offline sales measurement in 2013. The latter requires the advertiser to send hashed transaction data back to Facebook for matching on the back end. There are two levels to Google’s in-store sales measurement. The more basic level will report on the in-store sales impact of AdWords campaigns without any back-end integration on the part of the advertiser. Google does this by comparing store visits using smartphone data with credit card transactions in the aggregate. In this way the company can determine whether, during some conversion window, online ads generated an incremental sales lift (in addition to visits). Those that have customer loyalty and email data can “import store transactions directly into AdWords” and get much more detail about the ad impact on product level sales in stores. This is similar to the Facebook methodology and also involves hashed data matched on the back end. Google stressed that all of this was being done in a privacy-compliant way.

Facebook last Thursday announced a partnership with MLB that will bring 20 baseball games to the social media network. The games are free for all viewers and will air live each Friday, beginning with today’s match between the Colorado Rockies and the Cincinnati Reds. The games will air weekly on the MLB Facebook page.

Broadcast (English Language) Networks finished Saturday in prime time with an estimated average 9.457 million viewers. The total was less than the top peak audience of ITV’s ‘Britain’s Got Talent’ in the UK Saturday.

On this date in 1953, the premiere of ‘Melody’, the first Technicolor 3-D animated film.

Millennials Most Likely To Engage With Email Marketing

Millennial shoppers might be easier to reach than you think. According to a new study by Campaigner, Millennials are the most likely generation to engage with marketing emails. The email marketing company surveyed 761 consumers who made a purchase online between April 20 and April 26, 2017 to investigate generational differences in marketing preferences.

Twenty-two (22%) percent of Millennials said they are likely to open a brand email message, compared with an average of 15% across generations. Furthermore, 51% of Millennials selected email as their preferred digital marketing channel.

In an article by Jess Nelson in eMailMarketingDaily (052417), Pew Research Center defines the Millennial generation as “those born after 1980 and the first generation to come of age in the new millennium.” Growing up alongside the advancement of smartphone technology, Millennials are digitally connected and engaging with brands through mobile application.

On the opposite end of the spectrum, Traditionalists and Baby Boomers are more likely to prefer engaging with a brand in-store. In fact, 73% of Traditionalists and 67% of Baby Boomers prefer to interact with brands in-store, compared with 65% across generations. Older generations are also more likely to shop in the morning, while Gen X and Millennials shop at night, according to the study.

Email is the most preferred digital marketing platform for brand interaction across generations, with 44% of respondents overall engaging with brands in their inbox.

Email inbox fatigue, however, remains a serious concern so email marketers should strategically think about when they are sending email. The top complaint among all online stoppers was that they receive too many marketing messages, with 49% of respondents expressing concerns about promotional frequency.

Fox News Channel finished third among the advertiser-coveted A25-54 demo in prime time last week. And it fell from the top spot in total viewers. That hasn’t happened in nearly 17 years.

Per Chris Ariens, TV Newswer (052217) wrote, ‘A slew of bad news headlines about the Trump administration filled the cable news airwaves last week. MSNBC and CNN were the biggest beneficiaries of those stories which included details of Pres. Trump’s White House meeting with Russian diplomats and news of fired FBI Director James Comey‘s interactions with Pres. Trump. Those stories led to traffic records for the publications that broke the news, and days-worth of coverage on cable news.

The softness of Fox News’ prime time is also due to the fact that the network shook up its prime time late last month following the sudden departure of Bill O’Reilly, who had the most-watched show on cable news. This was the most-significant prime time lineup change since 2013. 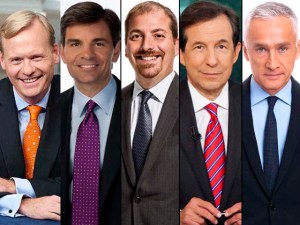 Sir Roger Moore is the first to enter from Her Majesty’s Secret Service. You only live once.

In the UK, Peak time is defined as Early Peak is 17:30 to 20:00 and Late Peak is 20:00 to 23:00.
Across The Pond
Television Research Note: The BBC is currently reaching a record weekly audience of 372 million across the globe. That’s a +7 percent rise from the previous year.

ITV #1 in the UK Saturday as ‘Britain’s Got Talent’ top program in the English Language World.

ABC #1 Saturday in AU as ‘The Coroner’ top program.

ABC
The Alphabet Network in Australia finished #1 Saturday with an estimated average 579,000 viewers and a 20.8% share.

Seven
The Second Commercial Network in Australia finished with an estimated average 547,000 viewers and a 36.1% share.

Nine
The First Commercial Network in Australia finished with a 22.9% share.

Ten
The Third Commercial Network in Australia finished with a 13.6% share.

SBS
The Special Broadcast Service in Australia finished with a 6.6% share.

Nine
The First Commercial Network in Australia finished #1 Sunday with an estimated average 926,000 viewers and a 29.7% share.

Seven
The Second Commercial Network in Australia finished with an estimated average 877,333 viewers and a 30.1% share,

Ten
The Third Commercial Network in Australia finished with an estimated average 577.333 viewers and a 18.4% share.

ABC
The Alphabet Network in Australia finished with an estimated average 475,133 viewers and a 14.8% share.

SBS
The Special Broadcast Service in Australia finished with a 7.0% share.