Posted on November 21, 2015 by overtheshouldermlb

‘It’s All About Screens.’ This is the Daily Diary of Screens. On Friday, November 20, 2015, CBS finished #1 as ‘Blue Bloods’‘ was the top program. ITV was #1 in the UK as ‘I’m A Celebrity…Get Me Out of Here’ was the top program. Nine finished #1 in Australia as ‘Better Homes & Gardens’ was the top non-news program and ‘Nine News’ was the nation’s top newscast. ‘Mockingly‘ #1 at Cinema weekend 20-22 November 2015 (Domestic) ‘Spectre‘ #1 International. There are 3.734 Billion Unique Mobile 68% Social Ad Clicks Are Now Mobile. Users as of this quarter, account for a 51% worldwide penetration. Direct uploads of user videos to Facebook now exceed YouTube. 88% of Twitter users are on mobile. The Google+1 button is hit 5 billion times per day. 80% of Internet users on Pinterest are female. LinkedIn has 347 million registered members. 600 million users on Whatsapp. SATURDAY AUSTRALIAN OVERNIGHT TV RATINGS (*SEE BELOW)

The Tiffany Network owns Friday, at lead the last two hours of the final workday of the week. First at 8P, ‘Amazing Race’ finished with an average 6.11 million viewers. Then at 9P, ‘Hawaii Five-0’ is part of the best 1-2 punch on television as it presented an episode titled ‘Hana Keaka’ (‘Charade’) which featured Dano as a college professor in economics and finished with an average 9.06 million viewers. Then at 10P, the big one, ‘Blue Bloods’ with an episode titled ‘Hold Outs’, Francis plays a waiting game with the Mayor; Jamie and Eddie figure out a neighborhood crime spree and Erin solves a curious case of a husband’s murder, finished with an average 11.00 million viewers, once again the top program of the evening on any network anywhere.

How Are Large Companies Measuring the ROI of Their Television Campaigns Today?
Advertisers are primarily measuring the outcome of their TV ad campaigns on the bases of increased brand awareness (49%) and increased sales (44%), finds a recent report from Forbes Insights and Simulmedia, and these are also the outcomes that have increased in importance for the largest share of advertisers over the past 3-5 years. So how are advertisers tying TV advertising to increased sales and other business outcomes? 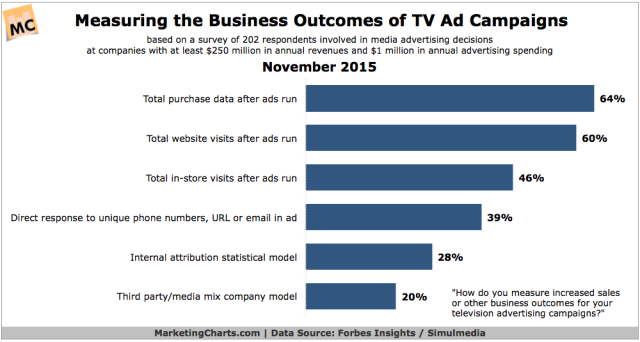 Most commonly, companies are looking at total purchase data after ads run (64%) and total website visits after ads run (60%). That’s likely a reflection of the common metrics used, which include direct website traffic, which is now as popular as Gross Rating Points (GRPs). The report does note that there seems to be some variation in how various industries measure outcomes. For example, while slightly fewer than half (46%) of companies overall measure total in-store visits after the ads run, the use of in-store visits as a tie-in ranges from 75% for the media and entertainment industry to just 16% for financial services.

The study shows that digital measurements are making inroads into TV ROI calculations. Indeed, 70% (7 in 10) respondents, all of whom came from companies with at least $250 million in annual revenues and $1 million in advertising spend, expect to change how they measure the outcomes of their TV campaigns over the next few years, with the biggest upticks projected being for tracking social media mentions, sales and direct website visits.

Nevertheless, consumers feel that TV ads have a strong influence on their purchases. Indeed, primary research conducted by MarketingCharts finds that TV ads influence the purchases of more US adults than any other paid media. Moreover, more adults report noticing specific advertisers on TV than on any other advertising channel.

Returning to the Simulmedia study, there seems to be a clear emerging focus on audience targeting. For example, when asked how an increased focus on ROI impacts, or will impact, traditional media advertising (including TV), respondents were most apt to point to the improved ability to target ads at those who are more responsive. And currently, more respondents are placing TV ads based on an audience basis (placing ads that target a specific audience regardless of content, network or channel) than on a content or reach basis. Going forward, marketers are expecting to change how they segment audiences, primarily by paying more attention to purchase likelihood, behavior or intent (54%) and to demographic data (49%).

Alert: You Are Now Naked! Ads Sync Inaudible Sound To Your Devices
Surreptitious cross-device tracking is now searching your movements, your questions, your life. In an article by Dan Goodin wrote in ars Technica (111615), there is a new threat that uses inaudible, high-frequency sounds to surreptitiously track a person’s online behavior across a range of devices, including phones, TVs, tablets, and computers. Earwitnesses now can say you are being tracked!

The ultrasonic pitches are embedded into TV commercials or are played when a user encounters an ad displayed in a computer browser. While the sound can’t be heard by the human ear, nearby tablets and smartphones can detect it. When they do, browser cookies can now pair a single user to multiple devices and keep track of what TV commercials the person sees, how long the person watches the ads, and whether the person acts on the ads by doing a Web search or buying a product.

Cross-device tracking can be performed through the use of ultrasonic inaudible sound beacons. Compared to probabilistic tracking through browser fingerprinting, the use of audio beacons is a more accurate way to track users across devices. When a user encounters a cross-device tracking advertiser on the web, the advertiser drops a cookie on the computer while also playing an ultrasonic audio through the use of the speakers on the computer or device. The inaudible code is recognized and received on the other smart device by the software development kit installed on it. Some also embed audio beacon signals into TV commercials which are “picked up silently by an app installed on a device unknown to the user. The audio beacon enables companies to know which ads the user saw, how long the user watched the ad before changing the channel, which kind of smart devices the individual uses, along with other information that adds to the profile of each user that is linked across devices.

The user is unaware of the audio beacon, but if a smart device has an app on it that uses the software development kit, the software on the app will be listening for the audio beacon and once the beacon is detected, devices are immediately recognized as being used by the same individual. The only factor that hinders the receipt of an audio beacon by a device is distance. There is NO way for the user to opt-out of this form of cross-device tracking. The users have no knowledge of which apps are using this technology. As of April of 2015, software is used by 67 apps and the company who provides this cross-tracking, monitors 18 million smartphones. Is your smartphone one of them?

The marketers who use this cross-tracking assemble a shockingly detailed snapshot of the person being tracked. The Center for Democracy and Technology wrote in recently filed comments to the Federal Trade Commission, “For example, a company could see that a user searched for sexually transmitted disease (STD) symptoms on her personal computer, looked up directions to a Planned Parenthood on her phone, visits a pharmacy, then returned to her apartment. While previously the various components of this journey would be scattered among several services, cross-device tracking allows companies to infer that the user received treatment for an STD. The combination of information across devices not only creates serious privacy concerns, but also allows for companies to make incorrect and possibly harmful assumptions about individuals.”

“As a person goes about her business, her activity on each device generates different data streams about her preferences and behavior that are siloed in these devices and services that mediate them,” CDT officials wrote. “Cross-device tracking allows marketers to combine these streams by linking them to the same individual, enhancing the granularity of what they know about that person.”

The FTC has scheduled a workshop on Monday to discuss the technology.

Brain Dead
Bloomingdale’s, once a bastion for superb display and advertising, has hit the low mark in advertising copy writing. One can only imagine who wrote this, who edited this and who approved this. It certainly could not have been done by anyone who should be aware of how wrong this actually is.

International Box Office
James Bond dominated the Chinese box office this weekend as it opened with $48 million for the Friday-Sunday weekend, a record for a non 3D U.S. film. The Chinese launch has pushed the ‘Spectre’ worldwide gross to nearly $550 million, led by $140.7 million in the U.S. after 10 days. In China, ‘Spectre’ is only $11 million short of the entire run of ‘Skyfall’, which was $59 million in 2012. Its opening day gross of $15 million on Friday set four other records for China, the biggest Friday opening any 2D U.S. film; the biggest November opening day; the biggest Bond opening and the biggest Sony Pictures opening day of all time. The film which reportedly needs $650 million to break even, will be profitable. The only question is how profitable will it be? And, will it beat ‘Skyfall’ box office? See Critique:https://www.facebook.com/cinemacritique/ for top Bond film box office results.

ITV again #1 in the UK Friday as ‘I’m A Celebrity…Get Me Out of Here!’ the top program again with 7 million viewers.

The Independent One has the top program for this time of the year. And it runs it to victory once again on Friday in the UK. ‘I’m a Celebrity… Get Me Out of Here!’ topped the TV ratings for Friday night as the live trial brought in an average 7.00 million viewers which drew a solid 30.8% share of the available audience.

Network Nine finished #1 for the ninth straight day as the first commercial television network in Australia had a 30.7% share of the available audience. ‘Nine News’ finished as the #1 newscast with an average 980,000 viewers, the top rated overall program in the nation Friday.

The Second Commercial Network in Australia finished #2 with a 29.5% share. But it did have the #1 non-news program as ‘Better Homes & Gardens’ finished with an average 846,000 viewers.

The Third Commercial Network in Australia finished third with a 18.1% share of the available audience. ‘Family Feud’ was the top network program with an average 523,000 viewers.

The Special Broadcast Service in Australia finished #5 with a 4.9% share of the available audience.

Network Nine won for the tenth consecutive day in Australia as it finished #1 with a 32.1% share of the available audience Sunday. The #1 newscast in the nation was ‘Nine News Saturday’ with an average 797,000 viewers.

The Second Commercial Network in the nation finished #2 with a 24.7% share. The network’s top program was ‘Hotel Transylvania’ which finished with 443,000 viewers.

The Alphabet Network in Australia finished #3 with a 19.8% share of the available audience. The network’s top program was the nation’s top program, ‘New Tricks’ which finished with an average 882,000 viewers, more than 320,000 better than any other non-news program in the nation on Saturday.

The Third Commercial Network in Australia finished #4 with a 15.1% share. It’s top program was ‘Ten Eyewitness News Saturday’ with an average 299,000 viewers.

The Special Broadcast Service in Australia finished #5 with a 8.1% share of the available audience. The network’s top program was the film, ‘O’Brother, Where Art Thou?’ which finished with an average 261,000 viewers.

Media Notes Briefs, Why And How You Must Explode With Mobile Now @:http://bit.ly/1MyC93u🆕💭🌎💬

Hoagy Carmichael ‘Am I Blue’