Posted on August 29, 2015 by overtheshouldermlb 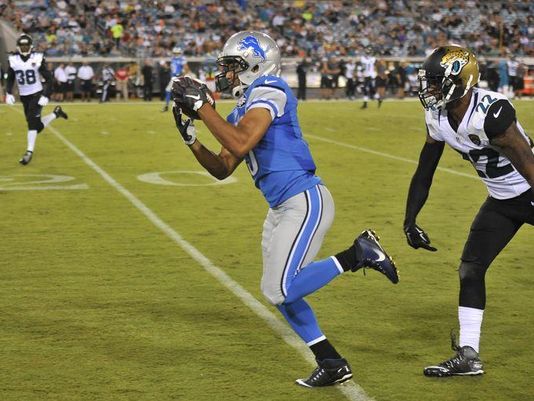 The Tiffany Network threw out its high flying schedule on Friday and brought pre-season NFL football exhibition match. At 8P, ‘NFL Preseason Football’ featuring the Detroit Lions at the Jacksonville Jaguars had the Lions winning in the finals seconds after Jacksonville dominated the game. It drew an average 5.42 million viewers as it finished as the top program of the evening on broadcast. Note: Due to the nature of live sports coverage, ratings for CBS (football) are tentative and likely to be adjusted in the final ratings.

On this date in 1967, the final episode of ‘The Fugitive’ aired. The Emmy Award winning television series aired for four seasons, and a total of 120 episodes from 1963. The second of a two part series finale, in which Dr. Kimble’s fate was shown, currently ranks third for the all-time highest U.S. television household share, at 72%. “The Judgment, Part 2” was ranked #23 on TV Guide’s 100 Greatest Episodes of All Time. The narrator was William Conrad. 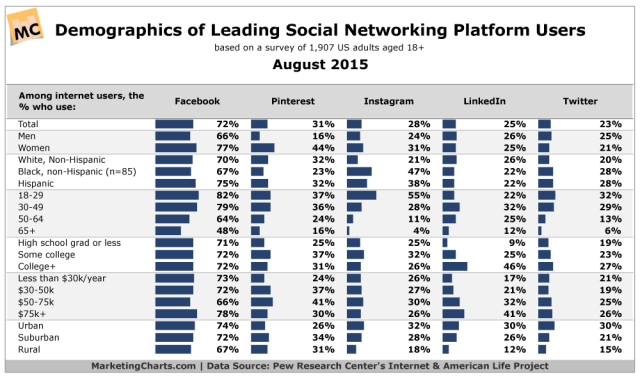 Demographics of Social Networking Platform Users
Facebook remains the most popular social platform, used by 72% of connected adults, reports the Pew Research Center as part of a recent study. The study breaks down the demographics of 5 major platforms, with some interesting results. Among the highlights: Pinterest’s continuing strong skew towards women; Instagram’s high usage among Blacks and Hispanics; and LinkedIn’s above-average adoption among higher-income respondents.

Facebook Hits 1 Billion Users In A Single Day
Facebook hit a milestone this week, logging 1 billion users within a single day and massive growth since it had 1 billion monthly users just three years ago. The platform is eyeing growth in Asia, Africa and Latin America, with US and European markets nearly saturated. In India, local companies were annoyed that Facebook’s offer of free mobile internet hampered competition, because only certain services involved in Facebook’s scheme were free. If you weren’t part of Internet.org, then tough. That backlash has meant a few changes. Users of Internet.org can choose which services they want to receive, and any company can now make an app that works on the internet.org platform.

But still, it’s a sign that what Facebook thinks is good for the internet won’t necessarily sit well with everyone.
In the parts of the world where Facebook is already well-established, the company is looked upon with intense suspicion thanks to the wealth of data it holds, and what exactly is being done with it. 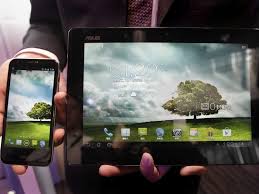 Millennials Abandon Television
There are still Millennials watching traditional television. But their numbers are dwindling fast, much faster than the networks want to admit and perhaps faster than even media people recognize.

In an article in Media Life by Bill Cromwell (082715), a new report from MoffettNathanson, a research and investment company, finds that from July 2014 to June 2015 live-plus-seven-day-DVR playback ratings for the 11 biggest broadcast and cable companies plummeted by 14% among adults 18-34.This group includes CBS, Disney, NBCUniversal and Viacom, the latter of which has taken the hardest hit, off 19 percent.

By comparison, among adults 35-49, ratings declined just 7% in that time, and among all viewers over age 2, the drop was also only 7%.

MoffettNathanson undertook the study as part of a broader look at Viacom, which has seen viewership fall steeply at a number of its networks over the past two years. But the viewership numbers for Millennials stand out as part of that greater study. They’re a reminder that younger people really do appear to be moving on to new forms of entertainment. It’s not uncommon for young people to eschew a form of entertainment their parents enjoy, but they usually come around. For example, teens and twentysomethings have never been big newspaper readers. But they typically become readers when they get older, own houses and have children and have higher-paying jobs. They then have an investment in the community, and they read the newspaper to keep up with local events.

It will be interesting then to see if this generational shift corrects itself as Millennials age. As they begin their families will they return to the living room couches their parents occupied in their years growing up? Some researchers predict not.

Many younger Millennials grew up with connected devices, and these devices function quite well as their principal media channels. They don’t feel the need for traditional TV watched on traditional TV sets. There’s no reason they’d change that behavior as they age.

Cable Television Suffers This Summer As Audiences Vanish.
Nielsen research, cited in The Wall Street Journal, indicates that US TV viewers have shifted attention from cable TV over summer 2015—a time of year when it used to shine. Among the top 30 cable TV networks tracked by the firm, 21 saw large declines in primetime ratings in July 2015. Time Warner’s TNT, which maintained the largest primetime audience by a sliver, saw a drop of 22%, while USA—part of NBCUniversal, owned by Comcast—dipped 14% to 2.0 million viewers. No other cable TV network in the top six broke 2 million. A+E Networks experienced the largest drop, at 36%. The Wall Street Journal article noted that instead of getting hooked on new cable shows premiering during the summer months, consumers are instead turning to digital video devices and video-on-demand to binge-watch shows they missed between fall and spring.

Viewers Abandon Pay TV In Q2 As 470,000+ Leave For Other Choices
According to data from Leichtman Research Group Inc., the 13 largest pay TV providers in the US, which account for approximately 95% of the market, saw a net loss of 470,855 subscribers in Q2 2015—the worst quarterly drop ever. In all, US pay TV subscribers to the providers studied totaled 94.9 million in Q2 2015.

Top cable provider subscribers totaled nearly 49 million, representing a net loss of 260,855, better than the approximately 510,000 lost in the same period last year, and the smallest in any second quarter since Q2 2008. Comcast, which had the most subscribers, also saw the biggest drop.

Telco providers added 4,000 subscribers in Q2 2015, small compared with a net addition of 284,000 in the same quarter last year, and the smallest since the services started in 2006. The rise was thanks to Verizon FiOS, which gained almost as many subscribers as leader AT&T U-verse lost. In all, telco subscribers totaled 11.7 million.

‘Fear the Walking Dead’ has set more records with newly launched AMC Global’s worldwide debut of the zombie drama. According to an article by Rick Kissell in Variety (082815) AMC Global was a top 10 network on Sunday in key regional markets across Europe, Latin America, Asia, Africa and the Middle East. The program debuted worldwide simultaneously at 9 p.m. ET/PT with repeats in local time zones during primetime. AMC will launch in the U.K. for the first time later this month. It has already received a 15-episode order for a second season, which will air on AMC Global in 2016.

‘Fear’ quadrupled the network’s primetime audience in key Latin America markets and made AMC a top 10 entertainment network throughout the region. In Brazil, where the newly launched network has only 30% distribution, AMC was No. 11 among all entertainment networks, among all cable and satellite platforms and in the key adults 18-49 demographic.

In Central Europe, “Fear” delivered a 1.8 share among adults 18-49 in Hungary, more than doubling the network’s daily average and becoming AMC Global’s highest-rated premiere to date. AMC also became the No. 8 most-wtched channel among all cable and satellite platforms and No. 9 in 18-49. In Bosnia, the series aired on two platforms (AMC and OBN) and delivered a 4.9 share among 18-49ers. 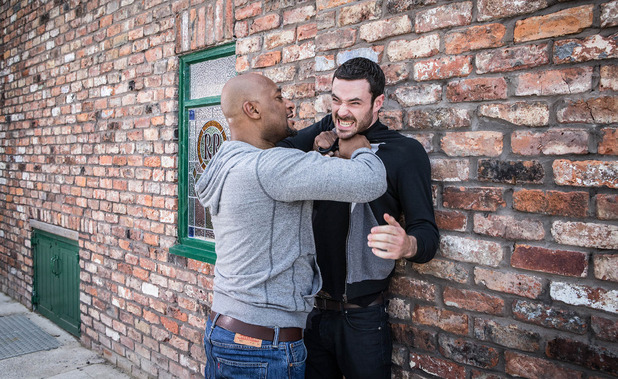 The Third Commercial Network in Australia finished #3 with a 18.0% share of the available audience. #10 was ‘Family Feud’ which finished with an average 576,000 viewers.

The Special Broadcast Service finished #5 Friday with a 4.8% share of the available audience.

The Special Broadcast Service finished with a 6.3% share of the available audience.