Posted on April 10, 2015 by overtheshouldermlb 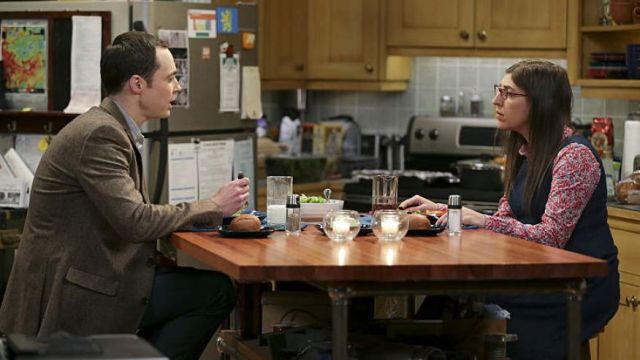 CBS won again on Thursday as ‘The Big Bang Theory’ delivered more than 14.6 million viewers as the top program of the night on television.

The Peacock Network decided reruns were a good thing on Thursday. At 8P, a rerun of ‘Law & Order: SVU’ drew an average 4.37 million viewers and a 3.0/5. But that was better than a rerun of ‘The Blacklist’ which drew an average of 4.11 million viewers and a 2.9/5. At 10P, an original episode of ‘Dateline’ pulled in an average 5.27 million viewers and a 3.7/7 which was the highest rating for the network in this time slot since the series finale of ‘Parenthood’ on January 29th. The criticism surrounding the suits at 30 Rock for their Thursday placement of programs has been overtold. But, they have to do something to get ‘The Blacklist’ into a better position in order to save its life…and the networks.

The Animal Network of Broadcast delivered dramas on Thursday. At 8P, a rerun of ‘Bones’ pulled in an average 5.00 million viewers and a 3.5/6. Then at 9P, ‘Backstrom’ pulled in an average 3.38 million viewers and a 2.5/4. The network was up 15% over last week on this night. A quick word on this evening: the Murdoch Minions deserve an applause for this evening’s performance. They have kept on a program which was one of their gems in the past alive. ‘Bones’ is a good today as it was when it began. They have managed to expand the characters into real human beings and ones we like. It deserves another final season if all will agree to come back. As for ‘Backstrom’, it is one of the best written shows on television. The Minions took a CBS pilot reject and made it one of the most unique programs and central characters on all of television. The Rose Garden murder episode was a delightful example of how they have created the lead character’s mind to work. And it was a Must See TV ON DEMAND episode. Bring it back.

On this date in 1957, Ricky Nelson sang for first time on TV’s ‘Adventures of Ozzie and Harriet’. He performed the song “I’m Walking.” 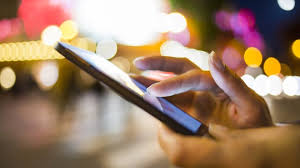 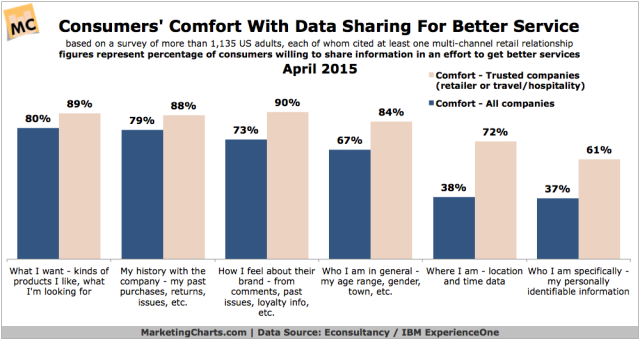 Separate survey results indicate that, for respondents, the most important attribute of “the perfect company” is one that is very trustworthy with their data and information.

There has been a big change this year as far as where social videos are being placed.

Advertisers running video ads on social media are more interested in metrics such as engagement with interactive elements (47% choosing as a top-3) and shares (43%) than they are with views (34%), according to a Mixpo survey of 125 US agency, brand and publisher executives, almost all of whom had run a social advertising campaign.

Small & Medium Sized Business Put Their Money Where Success Is

Small-business websites boost customer engagement, and a January 2015 study by Thrive Analytics found that US small and medium-sized businesses (SMBs) were seeing more success with the channel than any other. When SMBs were asked which marketing methods had been the most effective, company websites—the No. 1 response in 2014—remained the most popular, at 45%. This was 6 percentage points ahead of social media and 19 points above print yellow pages—and blew all other channels out of the water by 30 points or more.

Nearly half (49%) of SMBs intended to increase their marketing budgets this year, and websites will reap the benefits of that spending. Fully 36% planned to up expenditure on company websites—the highest percentage out of all channels studied. Social media, mobile advertising, online display ads and paid search all followed closely behind, each cited by around one-third.

January 2015 research by HubShout also found strong interest in websites among SMBs. When asked which services would be most in demand for 2015, 64% of SMB marketing professionals worldwide cited web development—trailing only search engine optimization (67%) and ahead of every other option, such as social media (38%) and content marketing (37%), by at least 26 percentage points.

The problem, though, is that small businesses are strapped for time, meaning they don’t necessarily have the hours to keep their websites up to date. According to Thrive Analytics, SMBs were most likely to update their websites quarterly (31%). Fewer than one-quarter made changes on a monthly basis, and just 16% did so daily. Promisingly, just under three in 10 (29%) updated their sites weekly. SMBs would be wise to put some of their extra website dollars toward more frequent updates. If they don’t, they risk having customers access out-of-date content on what is currently their most effective marketing tool. 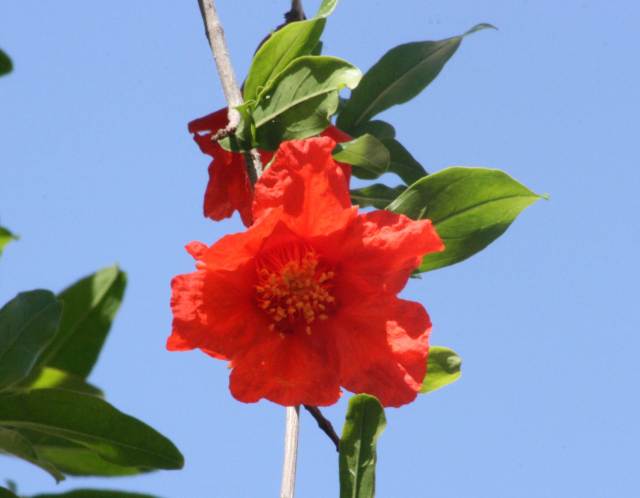 The fourth television service in the UK (that’s what it was established with) finished third on Thursday. At 8P, ‘The Superset’ drove in 1.40 million viewers (7.0%). Then at 9P, the second episode of ‘The Island with Bear Grylls’ pushed up the total to 2.01 million viewers (9.8%). Give it up for Bear!

The Big Two did not have a good night on Thursday as it finished fourth behind the fourth television service. Got it? At 8P, ‘Coast Australia’ was seen by an average of 1.50 million viewers (7.5%). Then at 9P, ‘Banished’ continued with an average of 1.89 million viewers (9.2%). At 10P, ‘Inside No. 9’ showed little interest as only 860,000 viewers cared enough to watch as it pulled a 5.1% share of the available audience.

Viacom 5 did even worse than The Big Two on Thursday to finish sixth. At 8P, ‘The Last Days Of’ started slowly with only 812,000 viewers (4.1%). Then, at 9P, ‘The Hotel Inspector’ jumped up to an average of 1.06 million viewers (5.1%). Which brought us all to Patrick Jane. At 10P, ‘The Mentalist’ dropped a ton to only an average of 659,000 viewers (4.1%) as one senses that this series is coming to an end. If you don’t want to hear about this, close your eyes: it ends this season and Patrick and Liz get married on the edge of a pond in Texas. That’s a long way from Sacramento. 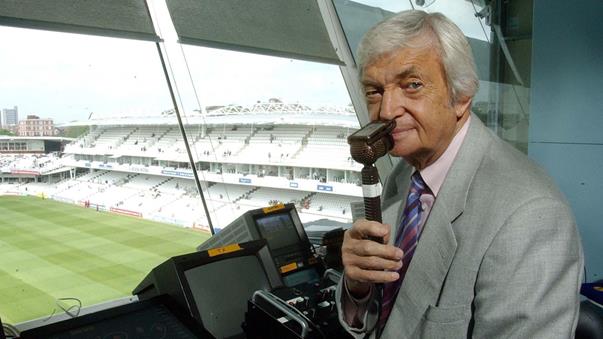 Network Nine was #1 on Thursday in Australia. Nine News was the top program. http://short.ninem.sn/UmQYSBT

The Nation’s Public Network, SBS finished #5 with 4.7% share of the available audience.

For Your Viewing Pleasure 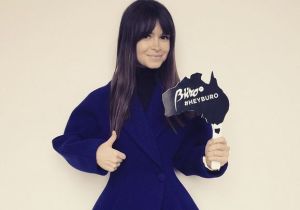 If you haven’t seen it, now is your chance to see the next big thing in digital/mobile sweeping the world for those interest in lifestyle. And luxury brands are flocking to it. Buro 24/7 is a worldwide phenom which has moved into Australia via http://www.buro247.com. As it just went live, Tiffany snapped up one of the advertising slots. According to Sarah Homewood who wrote in AdNews (7 April 2015), Buro 24/7’s partner in Australia, NewsLifeMedia’s lifestyle publisher, Nick Smith stated, ‘Luxury advertisers are now leap-frogging a lot of the people in the market when it comes to digital. They’ve definitely taken to social media. Some of the brands have followings that are into the millions, so they know the value of talking to a digital audience, but still in a luxury way.’ Smith explained that Buro 24/7 hopes to establish itself as a luxury space for a slightly younger-demographic in order to complement NewLifeMedia’s brands such as Vogue and GQ. “What’s really refreshing about Buro 24/7 is it’s very much a nod to modern-day or new luxury. Miroslava Duma has come up the ranks quite quickly, it [Buro 24/7] almost talks to the movement around her brand. It’s not just people who have a lot of money or a lot of income, [many] people can aspire to buy into luxury brands,” Smith said.

Can you imagine what happens when it lands in the U.S.?

Branford Marsalis ‘In The Crease’