Posted on March 22, 2015 by overtheshouldermlb 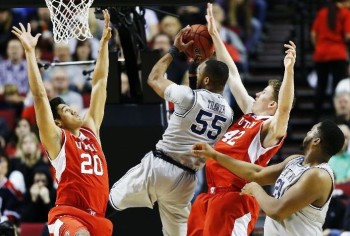 CBS #1 on Saturday with ‘NCAA Basketball Tournament’ but ABC’s ‘In An Instant’ #1 program.

The Tiffany Network powered to #1 on Saturday as college basketball took center stage. AT 8P, ‘NCAA Basketball Tournament’ featuring Utah defeating Georgetown, 75-64, drew an average of 4.27 million viewers. At 10P, ’48 Hours’ finished with an average of 3.65 million viewers. Note: Due to the nature of live sports coverage, ratings for CBS (NCAA Basketball Tournament) are tentative and subject to change.

The Alphabet Network finished #2 on Saturday. At 8P, a rerun of ‘Secrets and Lies’ drew an average of 1.94 million viewers. At 9P, a rerun of ‘In An Instant’ drew an average of 4.41 million viewers, comparable to the draw last week as it won the 10P time slot. In all honesty, knowing that the basketball tournament is a crap shoot on the draw of the teams on this first Saturday of the tournament, it baffles why none of the competing network programmers do not consider strong original programming to go up against it. This night could have been had with fresh programming at 8P. It was Utah against Georgetown…Salt Lake City against Washington DC. The Disneyites were sleep or out having fun. Hey…its the weekend.

The Peacock Network presented the movie, ‘Fast Five’ and it drew an average of 2.90 million viewers. Saturday Night At The Movies, a long ago staple on American television, didn’t draw. Sarnoff’s Staff needs to rethink this entire evening.

The Animal Network of Broadcast brought us reruns up against basketball. At 8P, a rerun of ‘Backstrom’ drew an average of 1.54 million viewers. Then at 9P, a rerun of ‘Sleepy Hollow’ gave everyone an indication that life is not long for this program as it drew an average of 970,000 family and friends. With all of its programming on Saturday finishing below The Mendoza Line, Murdoch’s Minions certainly have to go back to the drawing board. Think, Minions, think!

On this date in 1956, Perry Como became the first major TV variety-show host to book a rock and roll act on his program. The act was Carl Perkins.

This Weekend At The Domestic Box Office (Thru Saturday)

Internationally, ‘Insurgent’ grossed an estimated $18.3 million internationally through Friday, with France ($2.5 million), the U.K. ($1.6 million), Brazil ($1.5 million), and Australia ($1.3 million) comprising the top markets. ‘Insurgent’ is playing on over 9,500 screens in 76 markets — the widest international rollout of the year. It’s the top movie in 72 of the markets where it debuted this weekend.

It’s no secret that millennials are attached to their mobile devices, and recent research from My.com, conducted by Survey Sampling International (SSI) in October 2014, set out to determine just how much time this demographic spent with their beloved smartphones and tablets.

According to the study, which included 13- to 24-year-olds in its definition of millennials, 45% of smartphone- and tablet-using 13- to 18-year-olds in the US spent 4 hours or more using the mobile internet each weekday, with 28% logging on for over 5 hours on average. Nearly half of 19- to 22-year-olds spent at least 4 hours with the mobile internet every weekday. Here, too, just less than one in three logged on for over 5 hours on average. eMarketer estimated that this year, 88.0% of US internet users ages 12 to 17 will own and use a mobile phone at least once per month, and 80.8% will access the internet via such a device. Among 18- to 24-year-olds, mobile phone penetration will come in at 96.5%—the highest out of all age brackets—and 91.4% of these consumers will log on to the internet via their phones at least once per month.

Research has indicated that younger users spend more daily time on social networks, and My.com found that this trend wasn’t restricted to social. On both weekdays and weekends, millennials spent more time on average with all mobile communication activities besides email—which makes sense given that older consumers often need to access email more frequently for work.

Given all of the time they spend with mobile media, it makes sense that millennials want brands to be on top of their mobile game. According to September 2014 research by Annalect, when asked about the leading ways in which brands should use digital media, US millennial smartphone users ranked having mobile-friendly websites and apps No. 1, at 55%. While 44% did agree that brands should still maintain some form of human interaction, almost just as many (42%) thought they should offer loyalty programs through mobile apps or allow for mobile payments.

There’s no denying that millennials spend a huge amount of time with the mobile internet and communication tools. Brands looking to target them need to adapt to mobile in order to best reach them on their preferred screens.

Sky Atlantic at 9P had the FOX program, ‘The Following’ which was a no-show as only 59,000 UK friends and family of Kevin Bacon bothered to watch (0.3%).

SBS finished fifth with a 6.5 share of the available audience.

SBS finished #5 with a 6.1% share of the available audience.