Posted on January 15, 2015 by overtheshouldermlb

FOX was #1 on Wednesday with ‘American Idol’ the top program.

On this date in 1974, the iconic ‘Happy Days’ premiered on ABC-TV. In an episode titled, ‘All The Way’, the series ran untill 1984. Starring Ron Howard as Ritchie Cunningham and Henry Winkler as The Fonz. With Tom Bosley, Marion Ross, Anson Williams, Erin Moran, Donny Most, Al Molinaro and Scott Baio. It was the launching pad for so many of the famous ABC characters including, of course, Mork.

Best Supporting Actor
Robert Duvall in “The Judge”
Ethan Hawke in “Boyhood”
Edward Norton in “Birdman or (The Unexpected Virtue of Ignorance)”
Mark Ruffalo in “Foxcatcher”
J.K. Simmons in “Whiplash”

Best Actress
Marion Cotillard in “Two Days, One Night”
Felicity Jones in “The Theory of Everything”
Julianne Moore in “Still Alice”
Rosamund Pike in “Gone Girl”
Reese Witherspoon in “Wild”

A new survey by Cisco revealed that retail consumers in the U.S. prefer Internet of Everything (IoE) enabled retail experiences. The fifth annual Cisco Consulting Services retail survey found that most shoppers want innovations that improve convenience and efficiency, extending beyond personalization into hyper-relevance. Hyper-relevance delivers value — such as greater savings, efficiency, or engagement…in real time throughout the shopping lifecycle, using analytics to determine the experience that best suits the customer’s context (where he is, what she is looking to accomplish in that moment). Analytics helps retailers track in-store patterns and use existing video technology to determine, for example, where shoppers are spending more time in the store and which shelves need restocking, information that can immediately be used to improve shoppers’ experience and drive better store performance.

When asked to identify primary areas for in store retail improvements, 39% of consumers identified the process of selecting and purchasing goods. For example, having the products they want in stock and an efficient checkout process. By contrast, 13% chose a more personalized shopping experience.

To help provide guidance to retailers on where and how to make their strategic innovation investments, Cisco tested 19 different shopping concepts with consumers in its survey. Together, these provide a snapshot of consumer receptivity to new IoE-enabled innovations in the shopping experience. These use cases are at the heart of the IoE value that is up for grabs for retailers in terms of revenue uplift and employee productivity. Examples include product delivery (in-store pickup via drive-through lane at the store; same-day delivery; and secure lockers for pickup of online orders); augmented reality offers such as using a smartphone to scan products for special customized offers and promotions in the store; mobility-enabled shopping, including smartphone and tablet apps, smartphone checkout, smart online shopping carts and mobile payments; and interactive digital signage.

“The opportunity ahead is tremendous,” said Joseph Bradley, VP and founder IoT / IoE Practice. “Of the $14.4 trillion in IoE value for the private sector, $1.5 trillion is there for retailers. The key to capturing this value is realizing that digital consumers aren’t static — they’re dynamic.”

The Baby Boomer generation continues to play a major role in the housing market, as well as the U.S. economy more generally. Forty percent of households in the U.S. are headed by someone between the ages of 50 and 69, and this group holds 54% of all household wealth. Older households are less likely to move and purchase homes, but the sheer size and relative wealth of the Baby Boomer generation means they will account for $1 out every $4 spent on new home purchases or rent in the next five years.

Baby Boomers did take a major hit during the Great Recession. Boomer households rode the housing and stock bull markets to their peaks, with the median net worth of their houses reaching just over $200,000 by 2007. Then home prices and stock prices plummeted, and so did Boomer net worth, which fell to $140,000—more or less where it stands today. Had the Great Recession never happened, the median Boomer net worth could be close to $370,000—roughly 2.5 times what it is today. Without a doubt, many Boomer households have had to modify or delay their retirement and housing plans as a result.

The good news, though, is that the worst appears to be over, and Boomer financial situations have stabilized. Now, Boomers are revisiting housing plans they put on hold. Many are planning to retire as they reach their mid-sixties—five years from now more than half of all Boomer households will be headed by someone who is retired—and have plans for their housing needs as they approach retirement. As part of a broader initiative to understand where future home and community demand is headed, The Demand Institute surveyed more than 4,000 Baby Boomer households about their current living situation, moving intentions, and housing preferences.

Nielsen found that the common wisdom, which holds that Baby Boomers will downsize and head for a condo in a sunny place, appears to be wrong. First, nearly two-thirds of Boomers have no plans to move at all. They will “age in place” in homes and communities where they have often lived for a decade or more. Second, those who are moving are not going very far. Sixty-seven percent of movers will stay in-state and over half will move within 30 miles of their current home. Being close to their communities and families is very important to them as they age. “Wanting to be closer to family” is as common a reason for Boomers to move as seeking a “change of climate.” Third, and perhaps most surprisingly, we find that many Baby Boomers are still seeking their “dream home.”

Of greater economic importance, nearly half of those that will move (46%) plan to increase the size of their home or spend more for a home the same size as what they have now. Perhaps this seems odd—why are they upsizing at this life stage? What we are seeing is that many who are living in smaller homes than they would like, and many who are renting, are now acting on the housing plans they had to delay as a result of the economic difficulties of the past few years.

The other half (54%) of Boomer movers will downsize, either by moving to a smaller home or spending less for a home of the same size. Members of this group have already achieved their dream home, and are now looking for a home that will be easier to maintain as they age. But downsizers are not necessarily looking for lesser homes in all regards, and many will seek high-end finishes or more numerous community services and amenities. In fact, downsizers will spend more on their next home ($200,000) than upsizers ($180,000), on average, a reflection of their still-considerable nest eggs.

Much of the benefit will flow to the single-family home market: Baby Boomer movers, upsizers and downsizers alike, generally prefer such homes over condos and apartments. Few are planning to move to senior communities. They recognize the importance of having easy-to-maintain homes as they age, but most (69%) still want a yard or a garden. They are in general not yet ready for “senior” lifestyles. Only in one regard do we see them thinking ahead with health in mind: Boomers will overwhelmingly seek single-story homes when they move.

Most Baby Boomers plan to purchase when they move, and while some will go from owning to renting, just as many will do the opposite. The majority (56%) of these purchases will require mortgage financing, but Boomers do not seem daunted by the prospect of carrying mortgage debt well into retirement. More than three-quarters of Boomers say they are confident they will be able to qualify for financing (in fact they are much more confident than Millennials). Indeed, this generation is already carrying far more mortgage debt than the previous generation—the median outstanding mortgage balance for 50-69 year olds has grown 142% since 1992.

Finally, even those who do not move will contribute to the housing-driven economy, by way of spending on renovations. One way or another, the vast majority of the Boomer generation will be helping to drive the housing economy. In sum, we see a diversity of financial circumstances and housing intentions among Boomers, and their housing decisions reflect aspirational rather than just practical considerations. Many will upsize as they move. Many who will downsize will nevertheless upgrade via major home improvements—kitchens, master bathrooms and so on. Mortgage financing will remain crucial to Boomers realizing these housing aspirations. And many of those who are staying put will spend on improving their houses. As regards those aging in place, maintaining the status quo indefinitely will not be tenable for most. Many Boomers are in homes that lack aging-friendly features (single-story, easy maintenance, accessibility features, etc.). At some point, many will likely need to make aging-related modifications, whether by renovations or by moving.

What that means is that the Boomer generation will drive spending on housing in at least two waves. Many will move in the next five years, and many will have to move later. Further, what happens to housing has economic knock-on effects that are very broad, which is why developments in housing are so important. Increasingly, suburban communities that may have once catered to young families will comprise more and more senior citizens, many of whom will be living with mobility limitations or other special needs. As a result, there will be an increased need for public and private programs and services that help older Americans stay in their homes—home health care, transportation programs, nutrition assistance, community centers, and all the accompaniments of an aging community will be important for those who move now, and those who move later. That Boomers are no longer the major drivers of the housing economy does not mean they will not be very important to that economy.
Source: UNCOMMON SENSE: MOST BABY BOOMERS ARE NOT DOWNSIZING (QUITE THE CONTRARY). By Jeremy Burbank, VP, The Demand Institute and Nielsen, and Louise Keely, President, The Demand Institute, and Senior VP, Nielsen

Catch up with the latest edition of Media Notes Canonical at: http://bit.ly/1Aw7D5e
This week: Mobile Makes The ‘Biggest Winners in 2015 will Be Those Who Invest In Mobile’. 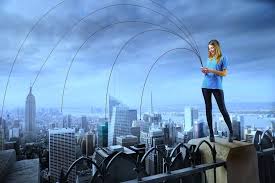 George Shearing ‘The Shadow Of Your Smile’