NBC Takes The Final August Tuesday In The U.S. BBC One #1 In The UK. Nine Tops Again In Australia.

Posted on August 27, 2014 by overtheshouldermlb 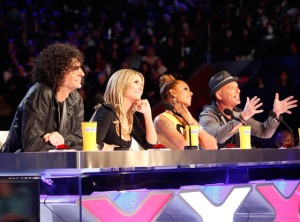 NBC Won On Tuesday and ‘America’s Got Talent’ was the #1 program.

The Peacock Network was victorious on the final Tuesday in the month of August of 2014 as at 8P, ‘Food Fighters’ began the evening with 4.70 million viewers. Then at 8P, ‘America’s Got Talent’ powered the 30 Rock to victory with a strong 9.40 million viewers and the top ranking show of the evening.

The Tiffany Network had a night of reruns of their powerful night of programs. But reruns just could not do it as at 8P, a rerun of the world’s top police procedural,’NCIS’, drew 8.90 million viewers with the powerful, season finale ‘Honor Thy Father’ episode centering on the passing of one of the cast members, Ralph Waite, who played Jethroe’s father, Jackson Gibbs.

At 9P, a rerun of ‘NCIS: Los Angeles’ featuring the episode which centered around a deep cover NCIS Agent walking a tightrope between right and wrong drew 6.69 million viewers. Then at 10P, a rerun of ‘Person Of Interest’ drew 4.72 million viewers as the episode which centered on the capture of one of the leads have our head’s scratching with what will come next as the new season begins.

The Little Network That Couldn’t flopped on Tuesday. There is no candy coating on how miserable Tuesday was for the CBS/Warner Bros. combine network. At 8P, a rerun of ‘iHeartRadio Album Release Party with Maroon 5’ drew viewers. Then at 9P, a rerun of ‘Supernatural’ pulled in viewers. Obviously, this lineup will have a difficult time finishing in the top ten of all network performances on this Tuesday evening when the cable networks are heard from.

On this date in 1948, on ‘Meet the Press’, Whitaker Chambers accused Alger Hiss of being a communist. It was a bombshell. And it led into one of the biggest stories of the 1950s in America.

BBC One won the evening behind the drama, ‘In The Club’ which was the top program of the evening outside of the soaps and brought in 4.45 million viewers (20.6%).

SBS finished fifth with 6.4%, above from Monday evening’s horrible finish.

SBS had a 4.7% share, done from the previous evening.