NBC With EMMYS Win Monday In U.S. BBC One #1 In The UK. Nine Tops All In Australia.

Posted on August 26, 2014 by overtheshouldermlb 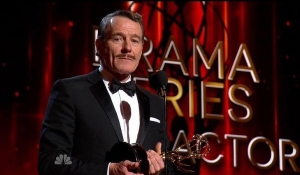 The Peacock Network presented the 66th Annual Emmy Awards from the Nokia Theatre at LA LIVE in downtown Los Angeles on Monday. The list of all of the winners is listed below. For the evening, which began at 8P (ET)/5P (PT), the show drew 15.58 million viewers. At 930P, it reached its peak. It’s NBC’s highest-rated Monday in metered-market households, excluding Olympics, in seven years, since Jan. 15, 2007 (‘Golden Globes’).

The Alphabet Network had its own weird way of handling an event night. At 8P, ‘Bachelor in Paradise’ drew in 4.60 million viewers. At 10P, ‘Mistresses’ drew 3.17 million. Which all goes to prove one thing: ABC can’t help itself when it comes to T&A.

On this day in 1939, the first televised major league baseball games were shown. The event was a double-header between the Cincinnati Reds and the Brooklyn Dodgers at Ebbets Field in Brooklyn. Although there is no footage from that famed telecast, the above is a view of the 1939 World Series by a fan who had an 8mm color film camera.

Lead Actor in a Miniseries or a Movie
Benedict Cumberbatch, “Sherlock: His Last Vow” (WINNER)

Writing for a Miniseries, Movie or a Dramatic Special
Sherlock: His Last Vow (Masterpiece) • PBS • Hartswood West for BBC/Cymru Wales in co-production with Masterpiece (WINNER)
Written by Steven Moffat

Writing in a Variety Special
“Sarah Silverman: We Are Miracles” (WINNER)

Though France’s economy is in the doldrums, the country’s ecommerce sector is enjoying double-digit growth. According to a July 2014 report from CCM Benchmark Group, digital sales were up 14% in 2013, compared with 2012. The analysis was based on data from 50 ecommerce sites, including those of Accor, Carrefour and Air France.

The largest online sellers generally fared best. Overall, seven out of 10 ecommerce merchants in France were profitable in 2013, according to CCM. But among smaller businesses—those with annual turnover of less than €1 million ($1.3 million)—the proportion seeing a profit was just 45%. Much of the sales gain was traceable to mobile devices. Fully 60% of retailers polled said mcommerce was their main growth driver during the year. Across the industry, 12% of online revenues in France came from mcommerce in 2013, a gain of 5 percentage points compared with 2012. But most online sellers also used other strategies to increase their competitiveness in the cutthroat world of retailing. When researchers asked these digital retailers about other sources of growth in 2013, 56% said they personalized offers to consumers, and the same number provided multichannel offerings. Almost half (46%) said international expansion contributed to better sales results in 2013. Two in five posted growth after diversifying their product range, and 14% of merchants said using social media raised their profits.

Delivery was another area where merchants in France aimed to increase their appeal to consumers. Fully 100% of those quizzed by CCM offered home delivery, and 74% of consumers used this option. More than half (53%) of retailers also let shoppers collect their purchases in-store; 44% of shoppers did so. There was one significant mismatch between delivery option and uptake: While 71% of online retailers enabled consumers to collect their shopping at a pickup point, only 34% of customers chose this method.

It is estimated that French business-to-consumer ecommerce sales will reach $47.65 billion this year, surpassing the 2013 total by 10.0%. People purchasing on digital platforms for the first time will fuel some of that rise. More than two-thirds of internet users in France are expected to be digital buyers in 2014. Yet this market still has enormous potential for expansion, if developments in neighboring countries are anything to go by. In Germany, it is expected that nearly 80% of web users ages 14 and older to make a digital purchase this year, and in the UK, 88.0% will do so.

BBC Two at 8P presented ‘University Challenge’ and it was watched by 2.65 million viewers (11.2%). At 9P, ‘The Scotland Decides’ debate between Alex Salmond and Alistair Darling was followed by 1.66 million viewers (6.8%).

SBS finished fifth with 6.4%, above from Monday evening’s horrible finish.