NBC Has ‘AGT’ And Wins Wednesday In The U.S. BBC One #1 In The UK. Seven Tops In Australia.

Posted on August 14, 2014 by overtheshouldermlb 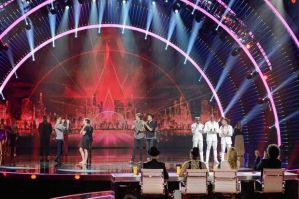 NBC and ‘America’s Got Talent’ were #1 on Wednesday.

The Peacock Network had a winner on Wednesday and it was at 8P, as a rerun of ‘America’s Got Talent’ led off the evening with 5.83 million viewers and a 4.0/7. Then an original episode of ‘America’s Got Talent’ drew the top number of the evening with 9.70 million viewers and a 6.6/11. At 10P, the amazing ‘Taxi Brooklyn’ brought a unique French twist to the police procedural, much like any of the ‘Transporter’ series of movies as Leo helped Kate in a most unusual way as they faced multi-racial fighting between Iranian heritage and French resolve. If you love Luc Beeson’s work, you will love this episode. It was one of the best written episodes of the year and as usual it was a Must See TV ON DEMAND. It drew 5.20 million viewers and a 3.2/6, down 9% from a week earlier. It is simply one of the best programs 30 Rock has put on the air in a long time. Check out the central premise of the show as Leo really makes a catch.

The Tiffany Network began the evening at 8P with ‘Big Brother’ and it delivered a time slot leading 6.59 million viewers and a 4.4/8. It was even with last season on this same, comparable day. At 9P, ‘Criminal Minds’ drew 4.90 million viewers and a 3.2/5. And at 10P, ‘Extant’ drew 5.63 million viewers and a 4.0/7, winning it time slot but not enough to take the evening for Black Rock. The program really needed to draw more than that with all of the hype behind it. Now, the suits at Tiffany are dropping the finale of the series from the premiere week schedule and double running episodes next Wednesday to burn through the remaining episodes.

The Animal Network of Broadcast put on its dancing shoes and presented the aging ‘So You Think You Can Dance?’ beginning at 8P and delivering 3.44 million viewers and a 2.9/5 for the two-hour run. Safe programming which is economical for a summer run but decidedly past its prime is a hallmark of Murdoch’s Minions. But it allows of ‘Debate and Wait’ among the suits and as long as debate is going on, jobs are safe. That is every everyone forgets about Tuesday’s disaster.

On this date in 1938, ‘The Student of Prague’ is the first feature film to be shown in full on 405-line television by the BBC.

The amazing, ‘CBS Sunday Morning With Charles Osgood has posted year-to-year gains in viewers and was again the #1 Sunday morning news program with viewers, according to Nielsen live plus same day ratings for August 10. ‘CBS Sunday Morning’ averaged 5.24 million viewers this past Sunday. Compared to the same day last year, the show was up +7% in viewers (from 4.90 million viewers). Sunday’s broadcast was anchored by Jane Pauley and featured Lee Cowan’s profile of actor Pierce Brosnan, Dean Reynold’s look at the history and future of the TV show ‘Candid Camera’, Rocco DiSpirito’s essay on the benefits of cooking at home, Steve Hartman’s story about a sign company owner paying back a past mentor, Anthony Mason’s profile of Pharrell Williams, and Tracy Smith’s look at the latest science in cardiac resuscitation.

While racing back from an abbreviated vacation, David Gregory knew the word was flying around that the suits were talking about removing him, especially after the news broke on Page Six. That’s all anyone needs to get the heart fluttering and knowing that Six is an official pipeline to disaster. So, cutting his vacation short, he raced back to his desk at ‘Meet The Press’ to show the bosses that he was very serious in keeping his job and his huge paycheck. 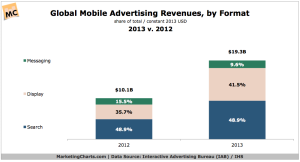 Global mobile advertising revenues almost doubled from $10.1 billion in 2012 to $19.3 billion in 2013, details a new report [pdf] from the Interactive Advertising Bureau (IAB) and IHS. While search remained the dominant revenue format, its share of total revenues remained flat at 48.9%, as its 92% year-over-year increase in revenues was on par with the overall gains. Display ad spending showed more rapid growth, more than doubling en route to 41.5% share of total revenues, up from 35.7% the year prior.
Mobile display ad revenues grew most rapidly in Latin America, though they began from the smallest base. Display gains – on an absolute basis – were more significant in North America, where spending almost tripled, up 173% year-over-year.

While mobile display ad spending is increasing rapidly in North America, a recent MarketingCharts Debrief [download page] on stated advertising influence indicates that few adults ascribe purchase influence to mobile display ads in comparison to other advertising channels. Nevertheless, mobile display ads tend to have an outsized influence on key demographic segments, per the study, including affluents, Millennials (for smartphones) and Baby Boomers (for tablets). For the time being, display’s share of North American mobile ad revenues is slightly lagging the global average (40.3% and 41.5%, respectively), as search maintains a majority 53.2% of mobile ad revenues in the region. Indeed, mobile search advertising spend more than doubled in North America, per the study, outpacing growth in other major markets.

With mobile display and search ad revenues quickly rising, North America overtook Asia-Pacific to become the world’s largest mobile advertising market, with $8.1 billion in revenues. The IAB recently reported that mobile ad revenues in the US grew to $7.1 billion last year, or 17% of total online ad revenues. Along with that increasing spend, new research indicates that mobile owners in the US are developing more favorable attitudes to mobile advertising.

BBC One had the top program of Wednesday evening, outside of the soaps, with the ‘Great British Bake Off’ which drew 6.87 million viewers and a 31.9% share of the available audience.

Time To Fire The Crew Member Who…. 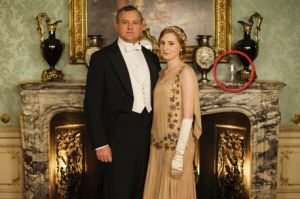 Water way to kickstart the new series of Downton Abbey! The stars have been posing for some new promotional shots but in the grand old home a plastic water bottle was left in shot, despite the fact the fifth series is set in 1924. A bottle, complete with blue top had been left on the fireplace as Hugh Bonneville as Robert, Earl of Grantham and Laura Carmichael as Lady Edith Crawley, posed up for the return of the show this autumn. Fans spotted the bottle over the shoulder of Lady Edith. Plastic bottles like the one in the promo picture weren’t used widely until the early 1960s. 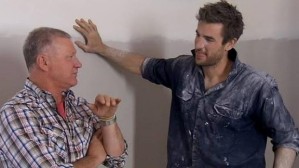 The Block Glasshouse contestants are being trolled on Facebook. Ex-AFL player Darren Jolly has been the target of social media trolls, according to Network Nine.

But there is a problem with ‘The Block Glasshouse’ as some are beginning to troll some of the contestants, leaving some feeling so shaken they haven’t wanted to leave the house or speak to their families.
The Nine Network’s reality renovation show has launched an anti-bullying campaign on its Facebook page, urging fans to have an opinion but don’t make it personal. “Opinions are welcome, but personal attacks are not,” a post pinned to the top of the show’s page says, with a photo of site foreman Keith.

Executive producer Justin Sturzaker says social media trolls have targeted several contestants this season, remarking on things like their personality, looks and relationship with their partner.
“We have had moments where people have not wanted to leave the house because they feel that the whole world hates them because of something that they’ve read on social media,” Sturzaker told AAP.
Darren and Dee Jolly. “They have not wanted to do media appearances and they have not even wanted to go out and talk to their own family until they have been able to be reassured that the troll that posted those comments was a very, very small part of the larger audience.”

The Block Facebook page has more than 468,000 fans. “If you get 20 or 30 comments that are negative in a row on a night that can be really upsetting,” Sturzaker said. “There can be quite a vicious tone to these statements. “We just felt that it was time to take a stand.” Sturzaker said several contestants have been targeted by internet trolls this series, particularly former AFL footballer Darren Jolly and his wife Deanne.

Getting back to Wednesday’s ratings, Network Ten with 17.7% share and ABC1 with 17.7% battled for the third spot. 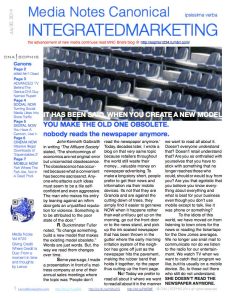 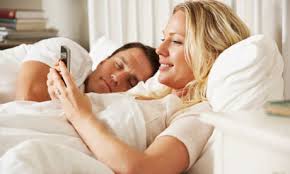