NBC Was #1 On Tuesday In The U.S. BBC One On Top In The UK. Nine Wins Again In Australia.

Posted on August 6, 2014 by overtheshouldermlb

The Peacock Network at 8P began with ‘Food Fighters’ began the evening with 4.30 million viewers and a 2.7/5, which was 7% down from the 2.9/5 from one week earlier. At 9P, ‘America’s Got Talent’ grabbed the top spot on this first Tuesday in August, leading NBC to a victory. ‘America’s Got Talent’ pulled in 8.94 million viewers and a 5.9 rating/10 share, peaking in the 930P half-hour with a 6.0/10. It was equal to last year’s performance on this comparable date.

The Tiffany Network finally ran out of rerun steam by finishing third on a Tuesday, something that rarely happens with its powerful lineup. CBS was down 7%, on average, from one week earlier with its rerun schedule beginning at 8P with ‘NCIS’ which pulled in 7.79 million viewers and a 5.3/9. Amazingly, this was the #2 program of the evening. At 9P, a rerun of ‘NCIS: Los Angeles’ which drew 5.60 million viewers and a 3.8/6. At 10P, another rerun of ‘Person of Interest’ drew 4.22 million viewers and a 2.9/5.

The top Hispanic network in America began the evening at 8P with ‘Mi Corazon es Tuyo’ and it drew an impressive 1.4 A18-49 rating, placing it #2 in the time slot. But it was at 9P, when the big program took center stage as ‘Lo Que La Vida Me Robo’ drew an impressive 1.6 A18-49 ratings, finishing 3rd in the time slot but featuring one of the best death scenes in the history of television (see the clip above). At 10P, ‘Que Pobres Tan Ricos’ finished with a strong 1.2 A18-49 rating, finishing just ahead of its rival on Telemundo, ‘El Señor de los Cielos’ which had a 0.8 A18-49 rating.

On this date in 1960, the amazing Chubby Checker performed “The Twist” on American TV for the first time on ‘American Bandstand’. Comon baby. Let’s do the twist. Check out his performance above.

Actor and presenter, James Corden, a Tony winner, is to become the host of CBS’ ‘The Late Late Show’, according to reports. Corden is being lined up as the replacement for Scottish-born host Craig Ferguson and will be officially announced shortly.

Sneak previewer of the new television series from Steven Soderbergh ‘The Knick’, starring Clive Owen which debuts this Friday on Cinemax.

FX release the first look at the new season. 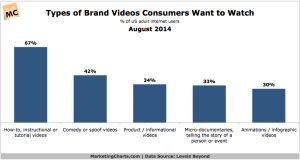 What Type Of Brand Videos Do Consumers Want To Watch?

Roughly 6 in 10 US adults say they watch videos when they visit a brand website with video content, and 4 in 10 prefer watching a brand video over reading the same information, per results from a survey conducted by Levels Beyond. The study results add to a growing body of research suggesting that consumers have a healthy appetite for video marketing, with numerous surveys (such as this one) indicating that online product videos boost consumers’ purchase likelihood. But what types of videos do consumers want to see? According to the Levels Beyond survey, consumers are most interested in:

how-to, instructional or tutorial videos (67%), followed by:
comedy or spoof videos (42%);
product/informational videos (34%);
micro-documentaries, telling the story of a person or event (33%); and
animations/infographic videos (30%).

For their part, marketers surveyed separately for the report indicated that they’re publishing videos from events (33%), how-to, tutorials or instructional videos (33%), interviews (30%) and testimonials (25%).

The study also notes the importance of social sharing, with 61% of consumers claiming they’d be more likely to watch company-produced videos that friends have shared and 38% believing a brand video is worth watching when it’s trending on social sites. The importance of social sharing was also seen in a 2012 study from Unruly Media, which found that viewers enjoy online videos they discover from a recommendation more than ones they discover through browsing.

Despite the apparent power of sharing, three-quarters of marketers surveyed for the Levels Beyond study rarely or never produce videos for their social media followers, and only 3 in 10 measure video success by the number of social shares. While the survey also found that marketers aren’t prioritizing video, other research hasn’t found that to always be the case. A study released earlier this year from Ascend2, for example, found that two-thirds of marketers using video plan to up their spend this year, while a survey by Social Media Examiner found two-thirds of social media marketers to be planning to increase their YouTube activity.

BBC One finished #1 on Tuesday with a new drama, ‘In the Club’ which topped the ratings outside soaps. The new series, at 9P, from Kay Mellor launched with an average of 3.98 million (19.1%).

SBS had an above average 6.4% share of the available audience.