NBC Wins On Tuesday In The U.S. BBC One Tops In The UK. Seven Tops All In Australia.

Posted on June 4, 2014 by overtheshouldermlb

NBC with ‘America’s Got Talent’ was #1 on Tuesday.

The Peacock Network is all fluffed out with feather ablaze. At 8P, ‘America’s Got Talent’ led NBC to Tuesday victory with 11.3 million viewers and a 7.1 rating/12 share. At 10P, the NBC scripted drama ‘The Night Shift’ won the hour with 6.87 million viewers and a 4.4/8. This is NBC’s top summer drama debut in five years (since ‘The Philanthropist’ on June 24, 2009). 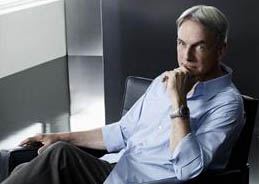 The Tiffany Network had again, an all rerun evening and it is beginning to show. The powerful veteran lineup just could not hold up to the new programming of other networks. At 8P, a rerun of America’s favorite procedural, ‘NCIS’ drew 8.61 million viewers and a 6.1/10 with a Christmas episode. Considering that weather was heating up on Tuesday across the nation, makes all the sense in the world, doesn’t it? Regardless we did learn one big thing from this episode titled, ‘Homesick’. We learn Gibbs doesn’t like ginger; however, he does like cinnamon. At 9P, another rerun of ‘NCIS: Los Angeles’ drew 7.69 million viewers and a 5.3/ 9 in an excellent episode about Chinese involvement in gaining Navy drone technology but we have seen this before. And at 10P, another rerun of ‘Person of Interest’ drew 5.61 million viewers and a 3.8/ 7). Note: usually original programming does better than reruns. Just say’in.

The Alphabet Network at 8P brought the world ‘Extreme Weight Loss’ and not too many cared as it drew 4.07 million viewers and a 2.6/4. At 10P, the unusual ‘Celebrity Wife Swap’ drew 4.23 million viewers and a 2.4/4, which featured the wives of David Justice and Dweezil Zappa switching households. OK. Perhaps original programming is not as good as good reruns. We apologize for the previous statement after viewing what the Disney Network of Broadcasting put on the air on Tuesday. 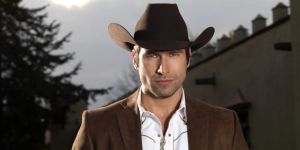 The Animal Network of Broadcast brought us original stupid. Alright already. Some network’s original programming is terrible. AT 8P, FOX brought us ‘Riot’ and it drew 1.15 million viewers and a 1.0/2. At 9P, they continued to embarrass themselves with ‘I Wanna Marry Harry’ and it resulted in a subpar 1.03 million friends and Royal Family and a 1.0/2. 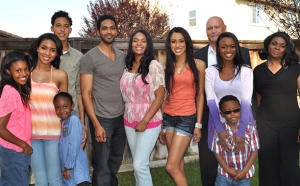 At the Little Network That Could at 8P, the series-premiere news, docuseries ‘Famous in 12’ died at the entry gate as it drew 610,000 viewers and a 0.7/1. At 9P it led into a rerun of ‘Supernatural’ which 730,000 drew viewers and a 0.6/1. Wow! This was a disastrous night for the C & W crew. Question: Does CBS and/or Warner Bros. really want their brands tarnished like this? 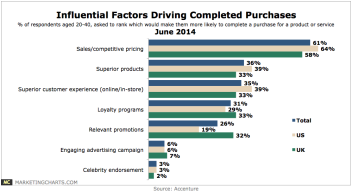 Per Accenture, consumers aged 20-40 in the US and UK were asked to rank the factors that would make them most likely to complete the purchase of a product or service. Sales and competitive pricing (61%) was by far their most critical. Superior products (36%) and customer experience (35%) are also key, according to respondents. They were followed closely by customer loyalty programs (31%) and relevant promotions (26%). Ad campaigns and celebrity endorsements trailed by a significant margin, presumably as they’re more influential in driving awareness than completed purchases. 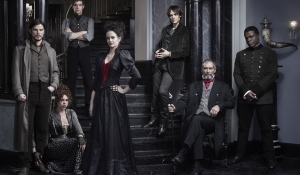 SHOWTIME has picked up a second season of its critically acclaimed drama series ‘Penny Dreadful’, it was announced today by David Nevins, President, Showtime Networks Inc. The network has given an expanded order of ten episodes to the series. Created, written and executive produced by three-time Oscar® nominee John Logan, PENNY DREADFUL has been embraced by the network’s subscribers, drawing 4.8 million weekly viewers across platforms since its launch. The series, which debuted to rave reviews, has claimed the spot as the network’s No. 1 watched new show ever on SHOWTIME ON DEMAND® and SHOWTIME ANYTIME® with over 3.6 million viewers on those platforms through the third week of the season. Starring Josh Hartnett, Timothy Dalton and Eva Green, ‘Penny Dreadful’ will go into production, and will once again shoot on location in Dublin, Ireland for a 2015 launch. “Picking up ‘Penny Dreadful’ was one of the easiest decisions I’ve made,” said Nevins. “The series has had worldwide impact, drawing big, passionate audiences on both sides of the Atlantic, and more than any other show on our network has hit the bullseye with viewers who want to watch television in all the new ways that are available. John Logan has deftly created an epic series that has drawn raves from a wide-range of audiences from quality drama lovers to critics, to hardcore genre fans. We look forward to working once again with our partners at Sky Atlantic and are extremely excited for what’s in store for season two.” 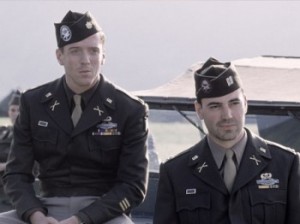 The winner of 6 Emmy’s and the Golden Globe Award for Best Mini Series, it was Executive Produced by Steven Spielberg & Tom Hanks.

This Friday, June 6, HBO will mark the 70th anniversary of D-Day with an encore presentation of ‘Band Of Brothers’ airing all ten parts of the acclaimed miniseries back-to-back on HBO Signature (9A-8P ET/PT). Originally presented on HBO in 2001, ‘Band Of Brothers’ tells the story of Easy Company, 506th Regiment of the 101st Airborne Division, U.S. Army. Starting with their rigorous training in Georgia in 1942, it recounts the achievements of the elite rifle company, which parachuted into France early on D-Day morning, fought in the Battle of the Bulge, and captured Hitler’s Eagle’s Nest at Berchtesgaden. Based on Stephen E. Ambrose’s acclaimed book of the same name, ‘BAND OF BROTHERS’ chronicles a unit that took 150 percent casualties and became true American heroes.

Seven with ‘House Rules’ finished #1 on Tuesday in Australia.

Seven & ‘House Rules’ were #1 in Australia on Wednesday. Note the sign of intelligence or “We’re #1”.

New This Week: Why Don’t You Use Mobile Now? @ http://bit.ly/1jxnTJN