Tuesday Is All CBS In The U.S. Nine Is Fine In Australia.

Posted on May 14, 2014 by overtheshouldermlb

CBS
The world of television belongs to CBS on Tuesday. And there is nothing bigger in American drama than ‘NCIS’ which drew 16.77 million viewers and a 10.7 rating and 17 share of the available audience. In this final episode of the season, Gibbs faces the loss of his father, as it is a tribute to the actor, , who played Gibbs’ father in the show. Ralph Waite died this past season. It is Must See TV ON DEMAND. At 9P, ‘NCIS: LA’ was a curious episode that smacked of a cliffhanger from the beginning as Hetty was called back to Washington to ‘face the music’; and the team faces a whole new menace. It too was Must See TV ON DEMAND. It drew 14.77 million viewers and a 9.3/14. At 10P, ‘Person Of Interest’ held its finale for the season and the triangle of the three parties fighting for supremacy of running the nation, continues. It drew 10.83 million viewers and a 7.2/12 as Decima created Vigilance to fight the Machine giving Samaritan the power. But Harold has ‘our gang’. Remember, Harold has John. It was wild. It leads to a completely new slate for next season.

FOX
FOX had a disaster on its hands. At 8P, the season-finale of ‘Glee’ drew 1.92 million viewers and a 1.8/3 and finished behind The CW’s ‘The Originals’. At 9P, in series-premiere, the Animal Network of Broadcast’s non-scripted hour ‘Riot’ was dead with 1.32 million viewers and a 1.1/2, which was 41% below the week-ago combination of sitcoms ‘New Girl’ and ‘The Mindy Project’. Late Night

On this day in 1998, the final episode of ‘Seinfeld’ aired on NBC. The commercial time during the show was priced at $2 million for 30 seconds for the show about nothing.

Just 3 days before Lifetime launches the global simulcast of Sean Hanish’s film, ‘Return To Zero’ starring Minnie Driver, Paul Adelstein, Alfred Molina, Kathy Baker, Connie Nielsen, Andrea Anders, Sarah Jones and Colette Freedman.
For a look behind the scenes of this important film, go to: http://bit.ly/1jfv4Xl.
For the official trailer, go to: http://vimeo.com/94229672.
For a look at the Entertainment Tonight story, go to: http://www.etonline.com/movies/146341_minnie_driver_new_role_is_the_hardest_thing_she_ever_done/
Check out USA Today article/video @: http://www.usatoday.com/story/life/people/2014/05/11/minnie-driver-return-to-zero-about-a-boy/8899951/
TV Guides latest article out yesterday can be found at http://www.tvguide.com/News/Lifetime-Return-Zero-1081688.aspx
CBS This Morning ran a 2 minute piece on ‘Return To Zero’ this morning @ 837A @ http://www.cbsnews.com/videos/return-to-zero-loss-of-a-child-inspires-new-movie/.

Simon Cowell (“American Idol,” “The X Factor”), who will be absent from the singing competition genre on Fox for the first time in 13 years, is launching a new talent show on Univision called “La Banda.” Univision Communications Inc. and Simon Cowell’s Syco Entertainment will offer what is describes as a new take on the singing competition format, where contestants will compete for their place in boy band “La Banda” and for a recording contract with Sony Music Latin and Syco Music. It debuts in 2015. There is no word at present who will serve on the judging panel. 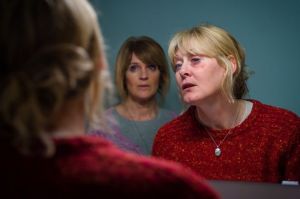 BBC One and ‘Happy Valley’ were #1 in the UK on Tuesday.

BBC One had the top program of the evening on Tuesday, excluding the soaps, in the drama ‘Happy Valley’ as it drew 5.72 million viewers and a 26.8% share of the available audience. Finally, on the morning front, ‘BBC Breakfast’ continued as #1 in the mooring with 1.47 million viewers (36.1%) and ‘Good Morning Britain’ had 540,000 viewers (13.9%) on Tuesday morning.

Nine and ‘The Voice Australia’ Ruled As #1 on Tuesday.

SBS finished the evening with 5.1% share of the available audience.

As you can see, no matter where we live in the world today, people are…
Switching Channels!
For updates throughout the day, FOLLOW on Twitter @overtheshoulde2 and LIKE at http://www.facebook.com/overtheshouldermedia and on Google+ http://bit.ly/19JVk76
Catch up with the latest edition of Media Notes Canonical at http://www.cnasophis.com
Media Notes Briefs can be found at http://sophis1234.tumblr.com
New This Week: Retailers Looking To Merge Online & Offline Shipping Experiences @ http://bit.ly/1jxnTJN