ABC Wins Friday In The U.S. BBC One Is #1 In The UK. Seven Edges Into The Top Spot In Australia.

Posted on March 22, 2014 by overtheshouldermlb

While the fans of basketball were glued and switching back and forth on four channels on Friday, including the usual leader on the night, CBS, the Alphabet Network took full advantage and powered to a victory as ABC pulled in an average of 6.84 million viewers beginning at 8P with a rerun of ‘Last Man Standing’ which drew 4.58 million fans. But at 830P, ‘Neighbors’ dropped to 3.78 million viewers. But at 9P, ‘Shark Tank’ drew 8.05 million viewers, a dramatic increase of over 4 million viewers. And at 10P, ’20/20′ didn’t disappoint as it increased the audience to 8.25 million viewers.

For CBS, this was ‘March Madness’ as this was the time for the second round of the annual basketball tournament. In the 8-9P hour, it drew 3.39 million viewers. From 9-10P, there were 3.61 million viewers on average At 10P, the coverage on The Tiffany Network pulled in 4.75 million, good for the #2 position on the broadcast channels.

Turner Sports and CBS Sports’ exclusive second-round coverage of the 2014 NCAA Division I Men’s Basketball Championship, across TBS, CBS, TNT and truTV on Thursday, March 20, is the most-viewed first Thursday of the NCAA Tournament in 23 years.

The CW with the season premiere of ‘Who’s Line Is It Anyway’ at 8P drew 1.91 million viewers and at 830P, had the same total of 1.91 million. At 9P, ‘Hart of Dixie’ in a new time period drew 1.22 million viewers. It was a better Friday for the Little Network That Could. NOTE: The CW was pre-empted in Chicago for NBA Basketball. Its likely these ratings will be adjusted.

Dick Clark interviews Neil Diamond on ‘American Bandstand’ and invites him to the autograph table.

On this date in 1969, Neil Diamond performed “Brother Love’s Travelin’ Salvation Show” on ‘American Bandstand’. For a short interview on long hair and whether it will become fashionable outside of the entertainment world, go to: http://www.youtube.com/watch?v=oixcT8Y0Ais 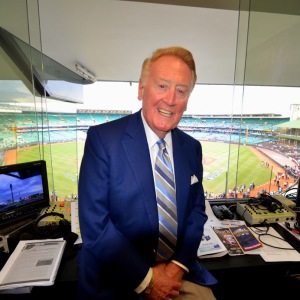 The great baseball announcer, Vin Scully was there to call the action.

Baseball began the season early this morning in Sydney, Australia, with the Arizona Diamondbacks taking on their division rivals the Los Angeles Dodgers. A capacity crowd saw the first Major League game in 100 years (The Chicago White Sox faced the New York Giants back in the day) in the same famed park. For a look to see the game from an Australian point of view, go to: http://www.smh.com.au/sport/scg-bowls-over-dodgers-legend-vin-scully-20140322-hvlpv.html

BBC One had a strong Friday night as ‘Sport Relief 2014’ pulled in an average of 7.8 million viewers with peak audiences of 10.3 million. Sport Relief’s return at 1035P was seen by an average of 2.84 million (32.6%). Highlights included Andy Murray on Mock The Week, a Mastermind footballer special and Kylie Minogue performing ‘I Should be So Lucky’. 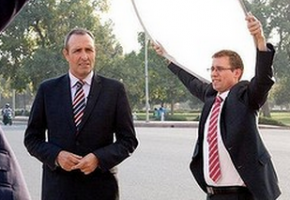 Melbourne Press Club last night presented its annual gongs for excellence in Victorian journalism in 2013.
Seven News State political reporter Brendan Donohoe (pictured) won for Best Breaking News Coverage following his live reports of the dramatic resignation of then Premier Ted Baillieu last March. This is his fourth Quill in a decorated career which includes the 2006 Gold Quill.
Seven News was the top program on Friday in Australia.

On an extremely slow evening, Seven edged out Nine by fractions of a percentage point. Seven finished with 30.3% share of the available audience and Nine had 30.0% share. Now, that is close.