NBC Wins In The U.S. BBC One Uses The Voice UK To Top Saturday. Doc Martin #1 But Seven Tops In Australia.

Posted on March 9, 2014 by overtheshouldermlb

Saturday, 03.08.14
NBC won Saturday behind the power of ‘Dateline’. At 8P, for two hours, ‘Dateline’ drew 5.1775, narrowly edging out its rival, ’48 Hours’. But ‘Dateline’ had a peak of 6.14 at 930P, the highest of the night on any network. at 10P, a rerun of ‘Saturday Night Live’ drew a dismal 3.19 million. But all in all, the suits at the Peacock Network are roundly slapping each other on the back for a non-sport programming victory on Saturday.

CBS for some reason wanted to give us all reruns of ‘The Amazing Race’ as at 8P it could only pull in 1.85 million viewers. At 9P, another rerun of the same pulled in similar results with only 2.8 million bothering to tune in. Finally, the cornerstone of CBS Fridays, ’48 Hours’ took over and brought the audience levels up to 5.13 million viewers which was the biggest audience block leading into the 11P local newscasts. With very little effort, the Tiffany Network could have won the night with more inventive programming….like the latest past episode of ‘The Good Wife’ leading into Sunday’s big reboot after weeks of reruns for the powerhouse.

FOX edged out ABC for third place as it presented at 8P another rerun of ‘Almost Human’. It drew 1.89 million viewers which actually beat out CBS’ ‘The Amazing Race’. At 9P, another effort to gain more eyeballs for its failing series hit of last season, ‘The Following’ had very few follow. It drew a poor 1.22 million viewers, losing a third of the audience brought by ‘Almost Human’. In fact from 830P to 9P, it lost 710,000 viewers from the moment it began airing. To the suits of the Animal Network of Broadcast, set Kevin Bacon adrift before he capsizes the entire network.

ABC began, at 8P, with a rerun of the ‘Late Night With Jimmy Kimmel Live After Oscar’s Special’ which did feature an amazing array of great videos from a tremendous list of major guest stars, including a hilarious Kevin Spacey improve of Johnny Carson. His rift against CAA was classic Hollywood inside. The program drew 2.02 million viewers to finish #2 in its time slot. Then the Alphabet Network go silly. It reran, back to back episodes of the dying ‘Once Upon A Time’. At 9P it managed to draw 1.24 million viewers, only beating Bacon’s folly. At 10P, it pulled off 1.37 million viewers from whatever they were doing to tune in. With the big cast, chalk it up to family and friends. 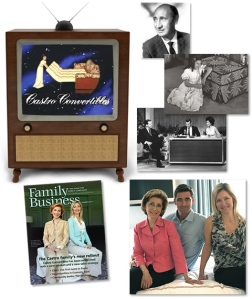 Castro Converaibles, the first advertiser in color in television history.

On this date in 1954, WNBT-TV (now WNBC-TV), in New York, broadcast the first local color television commercial. The ad was for Castro Decorators of New York City. Castro were famous for making the Castro convertible sofa beds or sleeper sofas. The commercial featured a little girl (a member of the Castro family) opening a big couch into a bed. ‘It was so-o-o easy! Let me see you try it.’ The History of Castro Convertibles was a real part of television history, as the young girl, Bernadette Castro, grew up before our eyes in commercials. Castro Convertibles is still in business today and Bernadette and her family continue to run the company.

BBC One’s ‘The Voice UK’ edged out ITV for the top spot on Saturday.

ITV at 7P, in its 11th season, had ‘Ant & Dec’s Saturday Night Takeaway’ and it pulled in its highest ratings of the season with 6.65 million viewers and a 28.89% share of the available audience but was just a tad behind the power that is ‘The Voice UK’. At 820P, Phillip Schofield’s ‘The Cube’ brought in 3.66 million viewers (16.19%). ‘The Jonathan Ross Show’ pulled in 2.58 million viewers (12.57%) with guests Richard Branson, Jennifer Hudson, Davina McCall and Sue Perkins.