NBC Continues On Top In The U.S. Behind The Voice. BBC One #1 In The UK With Silk. Seven Tops In Australia With My Kitchen Rules.

Posted on February 25, 2014 by overtheshouldermlb

The extraordinary James Spader leads ‘The Blacklist’ at 10P and NBC to #1 on Monday.

On FOX, it fell well below last year on the comparable date. At 8P, the always interesting ‘Almost Human’ led the Animal Network of Broadcast with 5.7 million viewers and a 4.2/6. It is 25% below last year’s time slot program, ‘Bones’ which had a 5.6/8 on 2/25/13. Of interest, it had an episode about nano bots, similar to what ‘Intelligence’ faced a week earlier but on a different channel (CBS). What is this nano-bot world coming to? And when did they enter our lexicon? At 9P, the second year drama ‘The Following’ on Fox has lost considerable strength as it could only pull in 4.58 million viewers and a 3.6/5. It was down 35% from the 5.5/8 a year-ago on the comparable evening.

‘Late Night with Seth Meyers’ had its debut on NBC on Monday. Amy Poehler was the first guest.

New York Rangers defeat the Montreal Canadians in the first hockey match televised in the U.S.

On this date in 1940, The New York Rangers and the Montreal Canadians played in the first hockey game to be televised in the U.S. The game was aired on W2XBS in New York with one camera in a fixed position. How exciting must that have been? By the way, the Rangers won that game, 6 to 2. Today W2XBS is WNBC. The Rangers won the Stanley cup that season by defeating the Toronto Maple Leaves 3-2 in overtime.

Cable
Ann-Margaret will join ‘Ray Donovan’ next season on Showtime. Legendary actress Ann-Margret has been added to the cast of the second season of Showtime drama ‘Ray Donovan’ in the recurring role of June Wilson, a major star back in her day that has a past with Ray’s boss Ezra Goldman (Elliott Gould). Headlined by Liev Schreiber and Emmy Award winner Jon Voigt, other actors slated to appear on ‘Ray Donovan’ in season two include Hank Azaria, Sherilyn Fenn, Kip Pardue, Wendell Pierce and Vinessa Shaw. Production on the second season’s 12 episodes is currently underway in Los Angeles and is set for a summer premiere.

Hulk Hogan leads ‘WWE’ on the USA Network to #1 on Monday on cable.

USA Network was #1 on cable on Monday led by ‘WWE’ as it averaged 4.663 million viewers. Here are the highlights of 30 ad-sustained programs that aired in primetime on the broadcast and cable networks Monday night.

Digital/Mobile
For the third consecutive week, AMC’s mega-hit ‘The Walking Dead’ is the week’s most popular TV program on Twitter. A total of 4.51 million distinct accounts viewed any of the 353,500 tweets generated from the Feb. 23 episode, but the show’s winning streak is likely to halt next week when ABC’s 86th Academy Awards will air directly opposite it. The debut of ‘The Tonight Show Starring Jimmy Fallon’ on Feb. 17 delivered over 11 million viewers and drew heavy interest on Twitter (2.83 million accounts/79,900 tweets), ranking fifth for the week.

Consumers are devoting considerably more time to their smartphones than their PCs, with Americans spending an average of 34 hours a month engaged with their phones, according to Nielsen.. Mobile applications for entertainment and social media top the list of uses, followed by text messaging. “Not only are consumers spending more time using their phones, they can’t seem to put them down,” the report states.

Martha Costello returned in ‘Silk’ and brought BBC One victory on Monday in the UK.

It was a big night for BBC One as one of their top programs premiered again led at 830P by ‘Panorama’ which brought in 2.24 million (9.5%) viewers. At 9P, ‘Silk’ returned for its latest season to top the Monday in the world of television in the UK. The legal drama brought in the biggest audience of the night with 4.66 million viewers (19.4%).

ITV at 8P began with ‘A Great Welsh Adventure’ and it won the hour with a whopping 3.55 million viewers (18.1%). It looked like a huge night for the network but at 9P, the usually reliable ‘DCI Banks’ dropped over a million viewers from last week, falling to 4.50 million (18.7%) viewers. It was unexpected and ‘Silk’ took the night in direct competition. 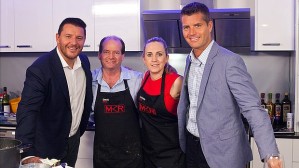 Claims surfaced that ‘My Kitchen Rules’ contestants David and Corinne(centre) had an affair and Corinne is still married. That will make it #1 in any nation when that news leaked out. It was #1 again on Monday in Australia.

No other networks had any program in the Top Ten on Monday in Australia.

As you can see, no matter where people were watching television, except for Australia, they were…