NBC Wins On Friday In The U.S. BBC One Leads In The UK. Seven Tops In Australia.

Posted on February 22, 2014 by overtheshouldermlb 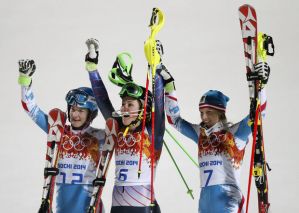 Mikaela Shiffrin wins the Gold for the U.S. on Friday in Women’s Slalom.

Friday, 02.21.14
NBC won again with the ‘Winter Olympics’ on Friday with 14.55 million viewers. With Canada again beating the U.S. in hockey and the expat Viktor Ahn a Korean who now skates short track for Russia, were the highlights. Lowlights with the clock running out on the Sochi Olympics, the Winter Olympics got their first doping cases. German biathlete Evi Sachenbacher-Stehle, a five-time Olympic medalist, tested positive for a banned stimulant and was sent home. Italian bobsledder William Frullani was ejected from the games after also testing positive for a banned stimulant. The IOC is conducting 2,453 drug tests in Sochi, a record for the Winter Olympics. If you are counting, the United States has the most medals with 27 overall, one more than host Russia and three more than Canada. All three countries have nine golds, one fewer than Norway’s 10 gold and 22 in total.

FOX presented reruns all evening on Friday. At 8P, the rerun of ‘Bones’ brought in 3.13 million viewers. At 9P, a rerun of ‘Enlisted’ barely broke ice with only 1.58 million. At 930P, another rerun of ‘Raising Hope’ drew 1.19 million viewers. It was a bad night for the Animal Network of Broadcast.

The CW at 8P presented reruns of ‘Who’s Line Is It Anyway’ as it drew 1.41 million viewers. At 830P, another episode drew an even larger 1.43 million viewers, tops on The Little Network That Could for the evening. At 9P, a rerun of ‘The Originals’ drew a number that wouldn’t even register on cable as it managed only 515,000 viewers.

Late Night
‘The Tonight Show will Jimmy Fallon’ and guest, Justin Timberlake, in the ‘History of Rap’. http://youtu.be/0NO0rArJRR4

Justin Timberlake on ‘The Tonight Show with Jimmy Fallon’ on Friday.

‘The Tonight Show Starring Jimmy Fallon’ won for the fifth consecutive day with a 6.1 rating, 15 share at 1130P as Justin Timberlake was the sole guest for the evening. The duo barely sat for a few impatient moments, skipping the intros and immediately grabbing the mics. They jumped straight into classic old-school textbook rap, reeling off jams from LL Cool J, Salt ‘N Pepa and the Beastie Boys before launching into familiar retro favorites like the “Fresh Prince” theme song, which perhaps nodded to Will Smith’s appearance on the premiere episode earlier that week. Rolling into modern song selections, the two included Kendrick Lamar’s “Swimming Pools (Drank),” Drake’s “Started From the Bottom” and a mash-up of Jay Z’s “99 Problems” and Ludacris’ “Move Bitch (Get Out The Way).” They finished the performance by jumping into the studio audience for RUN DMC and Aerosmith’s “Walk This Way” as the grand finale to this epic performance. To see it, go to: http://www.youtube.com/watch?v=0NO0rArJRR4#action=share. Over on CBS, ‘Late Show with David Letterman’ drew 2.1/5 to finish second and ABC’s ‘Jimmy Kimmel Live’ drew 1.9/4 with a rerun. ABC’s ‘Nightline’ averaged 1.2/4. CBS’s ‘Late Late Show with Craig Ferguson’ also averaged 1.2/4.

‘The Monkees’ on MTV

Today In TV History
On this date in 1986, MTV aired 22 hours of ‘The Monkees’ TV episodes in celebration of their station’s 20th anniversary. You can catch their performance of ‘I’m A Believer’ at http://www.youtube.com/watch?v=XfuBREMXxts 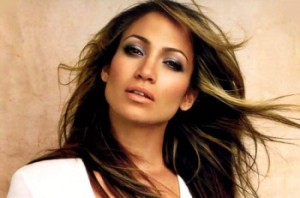 Jennifer Lopez to star in NBC series, ‘Shades of Blue’.

NBC has greenlit drama ‘Shades of Blue’ which will star Jennifer Lopez as a dirty cop who goes undercover for the FBI’s anti-corruption unit. NBC opted to order the project straight to series, bypassing the pilot development process. The project is currently scheduled to begin production in 2015 for the 2015-16 season. The series will be executive produced by Ryan Seacrest. It is not yet known how many episodes will be produced or if Lopez will continue to serve as a judge on American Idol next season.

BBC One had Six Nations Rugby Union as the top program in the UK on Friday.

BBC Three at 9P presented the movie ‘Meet the Fockers’ and it became the highest-rated multichannel program on the evening as it drew 651,000 (3.3%) viewers.

Craig McLachlan plays Dr Blake in ‘The Doctor Blake Mysteries’ on ABC1. It was the top non-news program in Australia on Friday.

Down Under
After one night out of first place, Seven roared back with a 29.4% share of the available audience on a slow summer evening.

As you can see, no matter where people were watching television everywhere, they were…