NBC #1 In The U.S. On Monday. ITV Rules In The UK. Seven Is Tops In Australia.

Posted on February 18, 2014 by overtheshouldermlb 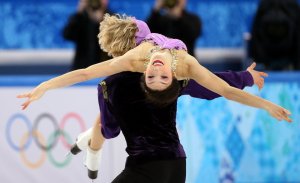 The First Americans ever to win Gold in Ice Dancing in the Winter Olympics. Davis & White Brought Home The Gold on NBC.

Monday.02.17.14
The Winter Olympics, featuring the return of Bob Costas in the anchor chair, scored a very dominant 23.46 million viewers and a 14.7 rating and 22 share of available audience from 8-11P. The peak half-hour was 1030P, with a 15.4/25, and this served as ample lead-in support to the debut of Jimmy Fallon as the new host of ‘The Tonight Show’.

ABC, despite facing the Olympics coverage had at 8P, ‘The Bachelor’ and it finished #2 with 7.61 million viewers and a 5.5/8. At 10P, that led the always strong ‘Castle’, with a superb episode about high school trickery to be able to draw 7.78 million viewers and again #2 in the time slot, had a 5.1 rating and an 8 share of the audience, tops for The Alphabet Network on Monday. ABC doesn’t have to take a back seat to anyone or anything thing with it comes to Monday evening. Both of these program pack a loaded loyal audience. In the case of ‘Castle’, the Alphabet Network has one of the best dramas in the history of television. Great show. Terrific writing and super acting. Great cast. It is Must See TV and has to be viewed ON DEMAND. Do you know who actually ‘done it’?

FOX used its combination of dramas, the superb new program at 8P, ‘Almost Human’ which drew 5.28 million viewers and finished #3 in the time slot and #1 on the Animal Network of Broadcast for the evening with a 4.0/6 and at 9P, ‘The Following’ which also was #3 in its time slot with 5.14 million viewers and a 3.8/5, were both equal to last week during these Olympic times. ‘Almost Human’ is fantastic and is becoming a Must See TV ON DEMAND program as it once again proved man-made man and man can work amazingly together.

CBS again from 8-10P ran reruns as at 8P, ‘How I Met Your Mother. drew 4.99 million viewers (3.0/4) and at 830P, ‘2 Broke Girls’ drew 4.82 million and a 3.1/5. At 9P, ‘Mike & Molly’ had 5.54 million viewers and a 3.4/5 while at 930P, ‘Mom’ drew 5.04 million viewers and a 3.2/5. At 10P, a fresh episode of newcomer ‘Intelligence’ is becoming the show CBS thought it had but it may not have the suit’s patience to keep it in its lineup and it presented one of the most interesting episodes ever seen on television. The plot had a bio-technological nightmare hit key scientist around the world and it took everyone in the cast to figure out this one. Great relationship between the two lead actors is taking shape and this could be the hit everyone thought it might. It drew a Tiffany Network high for the evening of 5.72 million viewers and a 3.8/6. Problem is that it is not getting the sampling that is needed to push this series over the top. It needs time. This episode is also a Must See TV ON DEMAND show. And, to repeat, it was the #1 show on Black Rock on Monday.

The CW tried but failed. In series-premiere news, at 8P, ‘Star-Crossed’ the story of romance between a human girl and an alien boy after he and eight others of his kind are integrated into a suburban high school, opened with a weak showing with only 1.24 million viewers sampling during the final Olympic week and a 1.1/2. In comparison, that was just 10% above ‘Hart of Dixie’ last week. Last year, in the same time slot, ‘The Carrie Diaries’ scored a 0.9/ 1. The CW is hoping an encore telecast of the pilot tonight at 9P will attract additional interest. At 9P, ‘Beauty and the Beast’ barely showed up with 766,000 viewers and a 0.7/1.

Jimmy Fallon debuts on ‘The Tonight Show’ Monday at midnight on NBC.

Late Night
The debut of ‘The Tonight Show Starring Jimmy Fallon’ has generated strong sampling at a special midnight start time following late local news and NBC’s coverage of the Sochi Winter Olympics. Fallon’s ‘Tonight Show’ debut Monday night averaged 11.3 million viewers and a 7.1 rating, 20 share in household results from the 56 local markets metered by Nielsen Media Research. That made it easily the #1 non-Olympic telecast versus all primetime and late-night programming last night on ABC, CBS and Fox in metered-market households (#2 among non-Olympic programs was a 5.5/8 for ABC’s ‘The Bachelor’). It was higher-rated than all but two of last week’s primetime non-Olympic programs on ABC, CBS and Fox in metered-market households (for the week of Feb. 10-16, behind only Fox’s Wednesday ‘American Idol’ and CBS’s Thursday ‘Big Bang Theory’ rerun, 7.4 each) as it was the night’s dominant late-night telecast. Jimmy Fallon opened with a hefty 7.1/20 from 12-1A The 12A half-hour was an 8.1/22, with 1230A at a 6.2/19, and that 7.1/20 beat the late night competition combined on CBS (David Letterman and Craig Ferguson) and ABC (Jimmy Kimmel and ‘Nightline’) by 82 percent. Comparably, Jay Leno’s last night as host of ‘The Tonight Show’ (on Thursday, Feb. 6) was a 9.2/22.
Fallon, of course, will be standing on his own effective next week at 1135P (minus the lead-in support from the ‘Winter Olympics’), but the sampling was exactly what NBC had hoped to accomplish. Fallon’s initial guests last night were Will Smith and U2 with walk-on appearances by Robert De Niro, Tina Fey, former New York mayor Ralph Giuliani, Kim Kardashian, Mike Tyson, Lindsay Lohan, Stephen Colbert (with a buck full of pennies) and Joan Rivers, in a silent tribute to Johnny Carson’s main substitute host who had been banned from ‘Tonight’ by Carson. U2’s performance on the roof of 30 Rock was a classic. If you missed this initial show, it is Must See TV and watch it ON DEMAND. You will love U2s last song, on stage, with the accompaniment of Roots. You can watch it at: http://youtu.be/seRY1_n4eHs


Today In TV History
‘Roots: The Next Generations’, which was set two years after ‘Roots’ made television history, debuted on ABC on this date in 1979. The story resumed in 1882 when Tom Harvey (Georg Stanford Brown), the great-grandson of Kunta Kinte, became a prominent leader of the black community in Henning, Tennessee.

Television News
With the success of ‘The LEGO Movie’ as it is setting all sorts of box office records, comes the news of an upcoming all-LEGO episode of Fox’s veteran ‘The Simpsons’. Titled ‘Brick Like Me’ and scheduled for the animated sitcom’s 550th episode on Sunday, May 4th, Homer (voiced by Dan Castellaneta) wakes up in a world where everyone in Springfield are made of LEGOs and he must figure his way out before getting stuck in the plastic world forever. Debuting on Dec. 17, 1989 (and spun-off from a series of animated sketches from variety half-hour ‘The Tracey Ullman Show’), ‘The Simpsons’ is the longest running scripted primetime series…comedy or drama…in the history of television. It spun-off ‘The Simpsons Movie’ in 2007, is a major theme park attraction, and has led to a merchandising bonanza including comic books, clothing, video games, food, stamps and music. ‘The Simpsons’ has already been renewed for a 26th season, in which producers have teased that one longstanding character will die. Yikes!

Cable News
So, how big was the NBA All-Star game? 7.5 Million Viewers Big. The Eastern Conference’s victory in the NBA All-Star-Game from New Orleans on TNT Sunday was the most-watched program on cable for the day, with 7.5 million viewers. Comparably, and opposite the ‘Winter Olympics’ on NBC and mega-hit ‘The Walking Dead’ on AMC, it was down 6% from the 8.0 million one year earlier. But versus the last time it faced the ‘Winter Olympics’ (from Vancouver in 2010), this was an improvement of 9% (from 6.9 million viewers).

Speaking of ‘The Walking Dead’, Sunday’s tally of 13.3 million on AMC was well ahead of last year on a similar comparable date. 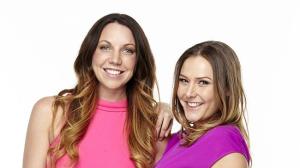 Seven had ‘My Kitchen Rules’ and that was enough to top the evening.

Down Under
The battle between Seven and Nine on Monday was unusually strong but in the end, Seven finished 30.5% share of the audience and Nine finished with 30.4%. Can it get any closer?