IT’S AN ALL-OLYMPIC FRIDAY FOR #1 NBC IN THE U.S. BBC TWO HAD TOP NUMBERS IN THE U.K. TEN WAS TOPS IN AUSTRALIA.

Posted on February 8, 2014 by overtheshouldermlb 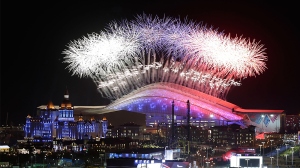 The opening of the Winter Games in Sochi, Russia was #1 in the U.S. on NBC.

Friday, 02.07.14
One would think the margin would have been larger. But there a several factors that will reduce the viewership in the coming weeks in the ‘every four year winter event’ that comes into play. First, it is a sporting event that people really would like to see LIVE and not tape delayed as if we still lived in the days of ABC’s ‘Wonderful World of Sports’ where that was common practice. But today we live in a nano-second society. If we really want to find out what is going on at the Games, we merely pull up our mobile and check it out. Second, propaganda is propaganda and Communist Russia propaganda is Communist Russian propaganda. If we have to watch the history of Russia bring out big signs of Lenin and Stalin. Bring out pictures of Mikhail Gorbachev who is being painted clearly in broad brush strokes as the guy who threw Russia under the bus and allowed the people with a driving will to break free do so. And there was Matt and Meredith bringing this story to us in living color…some of our most trusted television faces showing us once and for all that history belongs to the man who has, or in this case, owns the microphone. History in this time frame is being manipulated by the guy who allows NBC to bring the games into the homes of The Bear’s enemy. Bring out more pictures of Putin bare-chested riding a horse or fishing in a stream. Here is a leader who has said that the size of the country is the reason for a strong central government…ie: dictator…to rule its people. Czar Putin. But I digress. It’s about sport after all, something that has no political call, no place in politics at all…pure as the driven snow…separate from all that is unjust and suffocating. No. Sport has never been political. That is what the Opening Ceremonies were with the Master of the Russian Human Race front and center and watching RU technology break down at the very beginning of the event. Sure, it was only one snow flake that didn’t transform into the fifth Olympic ring but THESE ARE THE OLYMPICS WITH FIVE OLYMPIC RINGS, not four with a snowflake at the end. Or is that what he intended all along?

CBS began the evening at 8P with a rerun of ‘Undercover Boss’ which drew 5.04 million viewers. At 9P, a rerun of ‘Hawaii Five-O’ drew 4.99 million. At 10P, another rerun of ‘Blue Bloods’ drew broadcast’s biggest non-games audience of the evening with 6.71 million viewers, where under the guidance of Frank, the entire family did something exceptional in this episode. Great for ON DEMAND viewing.

FOX brought out a rerun at 8P of ‘Bones’ which drew an Animal Network of Broadcast high for the evening of 3.07 million viewers. Then at 9P, an original episode of ‘Enlisted’ brought reality to the suits at FOX that it doesn’t belong on the schedule. It drew million viewers 1.8 million viewers, less than a million ahead of The CW. That’s not good. At 930P, ‘Raising Hope’ didn’t as it dropped further and closer to The CW (That’s not good.) with 1.63 million viewers.

Wonder how many viewers were watching ’31 Days of Oscar’ on TCM?

‘Jimmy Fallon’ on his last late night show before departing to host ‘Tonight Show’ across the hall in 10 days.

Late Night
With a 12:05-1:05A telecast that followed NBC’s coverage of the Sochi Olympics ‘Opening Ceremony’, Fallon drew over 6.6 million viewers and averaged a 4.8 rating, 13 share in households in 55 of the 56 markets metered by Nielsen Media Research (with the Philadelphia market excluded last night), the show’s highest–ever overnights for any night of the week, topping the prior record set one night earlier of a 4.6/15 following the final telecast of ‘The Tonight Show with Jay Leno’. It’s also the highest metered-market household rating for the ‘Late Night’ franchise in currently available records dating back to the mid 1990s. The final ‘Late Night with Jimmy Fallon’ more than tripled the show’s season-average 1.5 metered-market household rating heading into this week (through Feb. 2). In 24 of the 25 markets with Local People Meters (Philadelphia excluded), Friday’s ‘Late Night’ scored a 2.1/10, up 250% from the season-average 0.6 heading into this week. Guests on Fallon’s final show on Friday included Andy Samberg and musical guest The Muppets. CBS’s ‘Late Show with David Letterman’ had 2.3/5; and ABC’s ‘Jimmy Kimmel Live’ pulled a 1.9/4. ABC’s ‘Nightline’ averaged a 1.3/4. ‘Last Call with Carson Daly’ averaged a 1.1/4, a huge rating for something that started as the cows were being milked.

A passing note regarding Jay Leno: NBC already painted over “The Tonight Show with Jay Leno” sign outside his studio in Burbank. The Peacock Network is wasting no time wiping away Leno’s memory.

‘Good Times’ debut on CBS 40 years ago on this date.

Welcome to new viewers in the U.S., Canada, The UK, Ireland, France, Belgium, The Netherlands, Germany, Japan, Australia and Columbia.

Across The Pond
BBC Two is airing the Winter Olympics in the UK and on opening day, drew a peak audience of 3.44 million viewers and a 17.2% share of the audience for an average of 2.47 million (16.3%) from 3.30P on. ‘Torvill and Dean’ brought in 2.74 million after the Olympic telecast. While at its peak it was the largest of Friday’s ratings, in actuality, it was not the top program in the UK on average. Because of the time shift between the UK and the Russian Federation city on the Black Sea, the four hours pushes events earlier in the day and does not have the same impact as say, prime time delivery. The Opening Ceremonies were viewed LIVE and as one can see, not to an overwhelming crowd of viewers in The UK. Having a big even at 4P on a Friday is not the optimum time. Have you ever been to London at 4P on a Friday? There’s just a wee bit of traffic. Is there something more than just the time sift of 4 hours which is making the Winter Games mute in the UK? 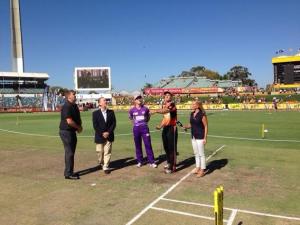 Down Under
The time difference brought on a different story in Australia on Friday. As it was many hours ahead in Australia, most of what was happening LIVE in Sochi, was early in the morning in Sydney and Melbourne and three hours earlier in Perth. For example, if the Opening was at 8P in Sochi, it was 2A in Sydney and 11P in Perth. Not so bad for the Western edge of Australia, but for the majority of the population, it is a disaster. Cricket anyone?

ABC1 had ‘The Doctor Blake Mysteries’ which drew 951,000 for the #4 program on Friday in Australia.