IF IT’S THURSDAY, IT MUST BE…THE OLYMPICS? NBC SNEAKS IN EARLY TO WIN IN U.S. BBC ONE #1 IN UK ‘POUND STORE’. NINE WON IN AUSTRALIA.

Posted on February 7, 2014 by overtheshouldermlb 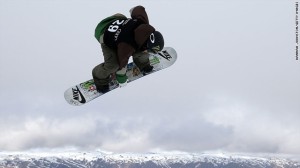 Winter Olympic Coverage On NBC Began On Thursday And Was #1.

Thursday, 02.06.14
NBC brought out the Winter Olympic in a global time delay on Thursday, a day ahead of time but was able to attract 19.56 million viewers to take a look at preliminaries and trials. It also gave America an opportunity to see Bob Costas use one eye and attempt to capture our imagination without looking directly at him as he is suffering from some stigma that he discovered he had when arriving in Russia. Bob. Everyone has a stigma when they arrive in Russia. It’s called ‘Looking over your shoulder at all times’. All in all it was an unusual evening from Sochi as we rediscovered all that is good and bad about the Winter Olympics. And the bad has all to do with what happens on the ice. Figure Skating Team competition is not something that attracts hoards to watch. Even the stands were a bit light with many empty seats. But it really was another opportunity to see American’s fall down on the ice when it comes to major competition. Honestly. We need to ask ourselves if we really need to see this every four years. For the record, the top 10 local markets for Thursday night’s NBC Olympics coverage were: #1 Minneapolis, 17.7 rating, 29 share; #2 Indianapolis, 17.0/28; #3 Kansas City, 16.1/25; #4 Denver, 15.5/25; #5 Oklahoma City, 15.3/22; #6 Ft. Myers, 14.9/23; #7 Salt Lake City, 14.8/27; #8 Dayton, 14.7/22; #9 Providence, 14.4/22; and #10 Milwaukee 14.1/22

CBS, always the leader on Thursday, could not match the sneak preview of the Winter Games. But at 8P, ‘The Big Bang Theory’ gave it a try with 17.02 million viewers tuning in. Between the two networks, that represented 36.58 million people watching television at 8P. At 830P, ‘The Millers’ pulled in 10.97 million viewers for #2 in the time slot. AT 9P, ‘The Crazy Ones’ drew their lowest number of the new season with 7.56 million. AT 930P, ‘Two and A Half Men’ increased it a bit to 8.13 million viewers and at 9P, ‘Elementary’ pushed it back up even further with 9.33 million viewers with one of the best episodes of the year. This cast is astounding. And it is a real credit to the writers who craft such superb episodes week after week. This is Must See TV and absolutely you have to see it ON DEMAND. Does anyone have a few extra blankets?

FOX was the only other network to really break through on this evening because it had ‘American Idol’ which drew 10.93 million viewers. Again, at 8P, more than 47.51 million viewers were watching television in the U.S. at that time. Big, big numbers. At 9P, ‘Rake’ pulled in 4.34 million viewers, fairly respectable considering everything else that was being presented on this very different Thursday evening. When considering how good Greg Kennear really is, consider he drew over four million viewers against the CBS comedies AND the Winter Olympics first night.

ABC never look so bad. At 8-10P, ‘The Taste’ drew 3.17 million viewers. While totally unimpressive, it did boost the total viewership for this evening to 53.92 million viewers. At 10P, a rerun of ‘Shark Tank’ pulled in 3.33 million viewers. The Alphabet Network simply did not have a good night on Thursday.

The CW did OK. At 8P, ‘The Vampire Diaries’ pulled in 2.13 million viewers bringing the broadcast total at this hour to 56.05 million. That’s a huge number and one that shows the power of Thursday television throughout America. When content is there, people will watch the most reliable medium in advertising…television. At 9P, ‘Reign’ pulled in 1.66 million viewers. Overall, it was a decent evening for The Little Network That Could. 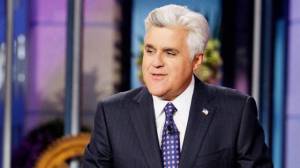 The final ‘Tonight Show with Jay Leno’ more than tripled the show’s season average in metered-market households, 2.8 /7 heading into this week. Guests on ‘Tonight’ included Billy Crystal, who was Leno’s first guest when he took over ‘The Tonight Show’ 22 years ago, and Garth Brooks, with appearances by Oprah Winfrey, Jack Black, Carol Burnett, Sheryl Crow, Jim Parsons, Kim Kardashian and Chris Paul. Appearing in taped messages were Jimmy Fallon, Bob Costas, Matt Damon, Mark Wahlberg, Charlie Sheen and President the President of the United States, Barack Obama who suggested that he was going to make Leno the Ambassador to Antarctica for all the bad jokes he had made about him over the past six years. CBS’s ‘Late Show with David Letterman’, 1.9/5 and ABC’s ‘Jimmy Kimmel Live’ with the entire cast of ‘The Monument’s Men’ also drew 1.9/5.

‘Late Night with Jimmy Fallon’ followed last night with its highest rating ever, a 4.6/15 in metered-market households. That was better than the prior record of a 4.2/12 for a special 11:56P telecast on Super Bowl Sunday, Feb. 5, 2012. The prior high for a weeknight ‘Late Night with Jimmy Fallon’ was a 3.9/13 on March 19, 2009, the night of President Obama’s appearance on ‘Tonight’. The 4.6 is also the highest for the ‘Late Night’ franchise since ‘Late Night with Conan O’Brien’ earned a 4.6/20 on Thursday, May 14, 1998, the night of the ‘Seinfeld’ finale.
Fallon tripled the show’s 1.5 season average in metered-market households heading into this week.
The Feb. 6 edition of “Late Night” featured Colin Farrell and Chris Pratt competing in the hilarious plastic bubble soccer match, and musical guest 2 Chainz. ABC’s ‘Nightline’ averaged a 1.4/4. CBS’ ‘Late Late Show with Craig Ferguson’ also pulled in a 1.1/4. 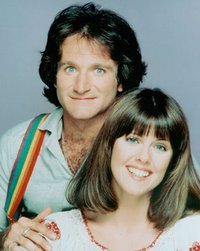 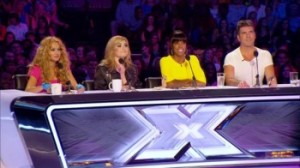 FOX Cancels ‘The X-Factor’. We are not ‘Cowell-Free’

Breaking News
Now we know why Simon Cowell is going back to the UK to be on ‘The X-Factor’. FOX cancelled ‘The X-Factor’ after three seasons today. 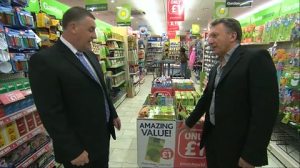 BBC One’s ‘Pound Shop Wars’ Was #1 In The UK On Thursday. 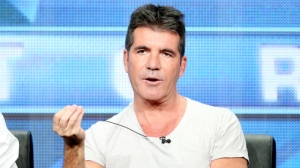 The T-Shirt Boy is coming back to ‘X Factor’ in the UK on ITV.

Breaking News
Simon Cowell is to return as a judge to the British version of “The X Factor,” which airs on ITV. The Tee Shirt is back!