CBS Wins On Saturday. BBC One Big Winner In The UK. ABC1 Tops In Australia.

Posted on February 2, 2014 by overtheshouldermlb

CBS began the evening at 8P with a rerun of ‘Two Broke Girls’ which drew 2.82 million and followed it up with a rerun of ‘Mom’ at 830P which had 2.94 million viewers. But it was at 9P when the perennial leader on Saturday night, ’48 Hours’ ran the first of two episodes, the first, a rerun, drawing a time slot leading 4.54 million viewers and the second episode, an original airing drew 5.29, the evenings top rated program.

NBC had a great start with a rerun at 8P of ‘The Best of Late Night With Jimmy Fallon’ and drew a time slot leading 3.86 million viewers. But the 10P rerun of ‘Saturday Night Live’ did the Peacock Network in by drawing only 3.81, nearly 2.5 million viewers behind ’48 Hours’.

FOX had the original Super Bowl preamble ‘NFL Honors’ from 8-10P and besides having Eddie Lacy of the Green Bay Packers winning the NFL Rookie of the Year, it could only draw 3.15 million viewers. It was not a good night for the Animal Network of Broadcast.

Groucho Marx’s ‘You Bet Your Life’

Today In TV History:
On this date in 1950, CBS debuted “What’s My Line”, starring Groucho Marx. 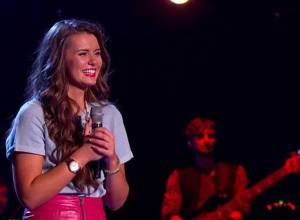 Rachael O’Connor (16) from Derry wowed everyone on Saturday on BBC One’s ‘The Voice UK’, the #1 program on the evening.

‘Doc Martin’ was the top program on Saturday in Australia