CBS With Comedies Topped Monday. BBC One Was #1 In The UK. Network 7 & ‘Kitchen’ Tops In Australia.

Posted on January 28, 2014 by overtheshouldermlb 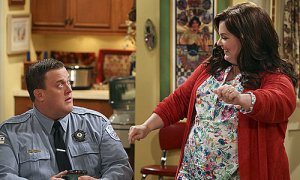 CBS for the fourth consecutive night finished #1 on Monday with a strong showing from their comedies led off at 8P by ‘How I Met Your Mother’ with a very strong 10.67 million viewers, the second biggest show of the evening. At 830P, ‘2 Broke Girls’ brought in 9.97 million while at 9P, ‘Mike & Molly’ took top honors for the evening with a strong 10.73 million which was nearly double all of the other broadcast competition combined in this time period. For a program that was put on hiatus and nearly banished forever from the schedule, it has become the powerhouse of Mondays. At 930P, ‘Mom’ drew 9.48 million. Every one of the comedies on CBS finished #1 in its time slot. Then at 10P, the new drama, ‘Intelligence’ wasn’t intelligent at all. In order to create a plausible storyline, it should be plausible. Monday’s episode, which drew 6.77 million viewers, was not and in doing so, despite what could have been a strong story, was riddled with crazy mind-bending, dumb situations. First, the lead character, the ‘new weapon’ is brought in and meet’s the President of the United States, or at least we think he is the President of the United States. They, yes the lead character and the President, fly in a cargo plan fitted with luxe seats, to Damascus, Syria. Yup. Damascus, Syria. In this day in age. And, they land in the middle of the desert where they pull out the Presidential limo which they eventually use as an escape vehicle to bring home two correspondents. Well, they really aren’t correspondents because they are C.I.A. Then in the end, we have a battle with the C.I.A. and our home team for power and now we are all mad and confused because it is that bad guy from ‘Fringe’ horning in. THIS IS NOT RECOMMENDED FOR VIEWING. This is crazy. What could have been isn’t and it has taken all of us on a ride we want to get off NOW. Again, CBS has failed to deliver a quality program at 10P on Monday because they have to continually fiddle with success. This show can’t even beat a rerun of a ‘Castle’ episode which we have seen many times in this time slot. CBS had this time period figured out, first with ‘CSI: Miami’ which ruled for a number of years then with ‘Hawaii Five-O’. Fearing ‘Castle’ was beating it when in fact it was just a real good battle for Monday @ 10P supremacy, The Tiffany Network moved ‘Hawaii’ to Fridays where it is doing very well. It’s a good show. But ‘Intelligence’ has to be renamed ‘Idiocy’ and removed from OUR memories.

ABC at 8P had ‘The Bachelor’ which drew an 8.61 million viewers. Then at 10P, they reran ‘Castle’ which could only draw 6.88 million viewers. If The Alphabet Network would have run an original episode, it might have given CBS a run for its money for the evening. For the sake of all of us, bring back original episodes of ‘Castle’ which remains one of the best written, stylish police procedurals of all-time.

NBC on Monday is so complex it hurts. At 8P, ‘Hollywood Game Night’ drew a respectable 5.59 million viewers. Now before you say this is a stupid program, you should take a look. It is really a flash back to the early days of television. Remember, ‘Pantomime Quiz’ was the first Emmy Award winner for most popular program in 1949. ‘Hollywood Game Night’ is a modern takeoff of that famous game show. And it is interesting! As crazy as it sounds, it is interesting. At 9P, a second episode of ‘Hollywood Game Night’ was really fun. With ‘NCIS’ co-star, Michael Weatherly as one of the celebrity guests (he came up with a great line when he responded to the question of how he feels when he has been on a hit show for the last ten year, ‘when you see the reruns of say 9 years ago, running with the current episode, you feel you have been replaced with a fat guy’ or words to that affect) it had you actively participating and during some of the time, guessing wrong, just like some of the celebs. It drew 4.52 million but is 10 times the show ‘Intelligence’ is. It may not draw big numbers, and two episodes of a good thing probably isn’t good, but it is a fun program to begin the evening with. Then at 10P, ‘The Blacklist’ which has no correlation at all with the preceding programming, finished #1 in its time slot with a very strong 9.97 million viewers. But there is a real problem hidden amongst the winning numbers. It doesn’t seem to be performing well against a rerun on ABC and a weak alternative on CBS. Could it be that our dark star, James Spader, is not what his fans want from him? Does he have to kill someone in cold blood every episode and does he have to continue to put seeds of doubt in his co-star’s character about her husband? And speaking of killing, does over-kill ring a bell? Does he have to unload his weapon into a person who has already been shot and bleeding to death from her stomach wound? There is a problem here which will be exposed when ABC decides to run original episodes of ‘Castle’ and end this battle once and for all. 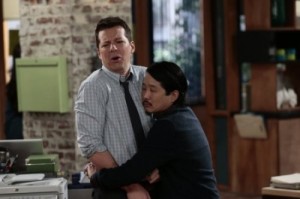 But all was not lost for NBC. ‘Sean Saves The World’ was cancelled. News that production has been shut down with only 14 of the episodes shot, 13 of which have already aired, was the big clue. Now if ‘The Michael J Fox Show’ is cancelled, one-have of the dreadful comedy lineup will be complete.

FOX wasn’t very FOXy on Monday. Thinking they would have a big night with their former strong show of last season, ‘The Following’, at 8P, a rerun of the show brought in only 3.92 million viewers, well below the big broadcast brothers. Then at 9P, ‘The Following’ with an original episode finished #3 again with only 6.02 million viewers. It was a bad night for the Animal Network of Broadcast. It had no following.

The CW at 8P brought out ‘Hart of Dixie’ and drew 1.16 million viewers. At 9P, ‘Beauty and the Beast’ drew 910,000 viewers. It’s beginning to look like the Little Network That Could should be switched with a cable network, say USA or TNT or TBS or History, to make this broadcast network competitive. Can you cancel an entire network and start all over again? The graveyard of former broadcast networks is nearly full with the likes of Dumont, United, UPN and The WB. Perhaps The CW should find it gravestone and let us all rest in peace. 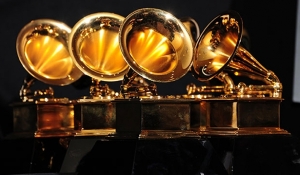 Elvis Makes His First Appearance on National Television on CBS.

TODAY IN U.S. TV HISTORY:
1956 – Elvis Presley appeared on the Dorsey brothers’ “Stage Show.” It was Elvis’ first network television appearance. For video of this historic telecast, go to: http://bit.ly/1evtNog 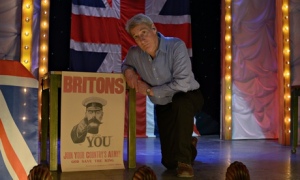 TODAY IN BRITISH TV HISTORY:
1965 – The Who made their first appearance on the British TV rock show “Ready Steady Go!” 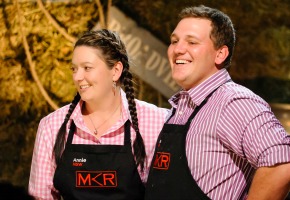 ‘My Kitchen Rules’ returned with the top show of Monday on Network 7.